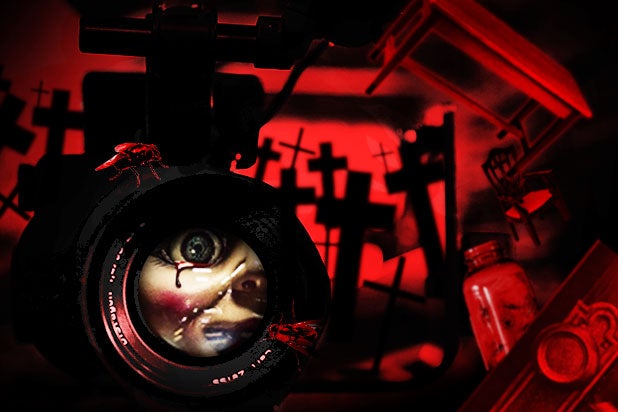 A moving piano bench, uncontrollable nose bleeds and an unexplained loss of power in a production trailer are just a few of the eerie experiences the cast and crew of “Annabelle Comes Home” had during the shoot.

Twelve-year-old star Mckenna Grace, who plays the daughter of paranormal investigators Ed and Lorraine Warren (Patrick Wilson and Vera Farmiga, respectively) in the movie, had experiences she couldn’t explain.

“There’s a lot but I’ll start with a short one: I woke up one morning and I had this weird, small cut near my hairline on my forehead and it was in the shape of a triangle,” she told TheWrap. “I was really freaked out, and I got really scared because Gary Dauberman [director] had told me I was abducted by aliens, and I started researching. I literally thought I had gotten abducted by aliens.” A creepy coincidence: while Grace was explaining her experience, she said a car just passed her and it had a picture of an alien on it.

“And I’m just starting with the least scary experience,” she added. “When all of us were on set together for the first time, the lights went out and we were all freaking out and asking, ‘Annabelle, are you there?’ Then, the lights turned back on and my nose was bleeding so heavily. It happens sometimes because of allergies but not this heavy — as soon as I left set to get a tissue, it stopped.”

The “Conjuring” universe films have a longstanding tradition of inviting a priest on set to bless the production — for “Annabelle Comes Home,” a priest blessed the set on November 7, 2018.

“He actually did it in the artifact room and he stood there and he had this iPad and he was reading out of that and the Bible, and he was throwing holy water around and it was really cool to watch,” Grace said. “He blessed me, [costars] Madison [Iseman] and Katie [Sarife].”

But the paranormal still had a way of wreaking havoc on Grace and Patrick Wilson, as well as visiting journalists and certain artifacts in the replica of the famed Warren artifact room.

According to the production notes, a piano bench in the artifacts room “moved overnight on several occasions, though no crew members were working, and the stage was locked.” When a journalist visited set one day, his watch “went haywire, with it changing time, speeding up and jumping ahead hours at a time. But when he put it on the next day, the time was accurate and everything was back to normal.”

Grace, who plays 10-year-old Judy Warren, also experienced things like “unexplained loss of power in her trailer, doors that she found open when they had been shut, a shadowy figure asleep in one of the empty rooms on location,” and more. She explained that the lights in her trailer didn’t work one day but all the other trailers around her were fine, and that there was a funky smell that went away when everything was fixed.

She had also been gifted a rainbow-colored rosary, according to the production notes, and one day when she was wearing it, the crucifix on the necklace fell off and dropped to the floor.

“I was wearing it and all of a sudden it just broke,” Grace said. “I had been wearing it all day and nothing happened. It just broke — it was the strangest experience.”

According to the production notes, “also during filming, Grace brought a new instant camera to set to take pictures with cast and crew, but every time she snapped a photo with Annabelle in it, the picture came out black. And in a photo with Patrick Wilson, a black mark appeared over the cross he was wearing, obfuscating the holy symbol.”

Grace explained further: “I brought my camera and I took photos of everyone, and when I would take photos of Annabelle, every time, it would come out black. I took a photo of with her two different cameras, and both times, it came out black. Every other photo was fine. I thought it maybe was the camera reflecting the case, but I took the photos of her outside the case. I also took a photo of me, Vera and Patrick, and Patrick wears this big cross in the movie, and when I took the picture, the cross was whited out in the photo with black stuff around it.”

During one safety test run of a scene, a glass case fell over right where she and Iseman were standing. A witch bottle Grace received as a gift after wrap started heating up out of nowhere, which made the wax melt off and burn her hand.

But maybe the eeriest on-set experience Grace had occurred during the filming of a scene that required Grace and Iseman to walk down a hallway — where Annabelle herself made an appearance.

Also Read: Lorraine Warren, Paranormal Investigator and Subject of 'The Conjuring,' Dies at 92

“Madison and I had a scene where we had to walk down a corridor, and we heard three knocks on a door but the camera was rolling so we kept going,” she said. “We did it a third time and we heard it again. At that point, I asked Madison if she heard it and we both thought it was weird. In the first ‘Conjuring,’ three knocks is a sign of the holy trinity: the Father, the Son and the Holy Spirit. We opened the door and Annabelle was sitting there in a rocking chair. We thought the guys were just messing with us. The next take, we heard the knock again and we opened the door again — and Annabelle was gone.”

Wilson and Farmiga reprise their roles as Ed and Lorraine Warren from “The Conjuring” films. Dauberman is directing the film from a screenplay he wrote, from a story by Dauberman and James Wan, who created the franchise.

“Annabelle Comes Home” is the third film in the spin-off series, and follows Ed and Lorraine Warren who decide to bring the possessed doll to the locked artifacts room in their home. But of course, when her daughter and her friends visit the room a year later, Annabelle is unleashed.

“Personally, I don’t know if I believe in ghosts or not,” Grace concluded. “I am torn because there are logical explanations but there are also things that cannot be explained.”

15 Facts About the 'Conjuring'-Verse Hauntings, Including 'The Nun' (Photos)

Here’s what’s based on real-life hauntings, and what isn’t