Now that “Annabelle Comes Home” is in theaters, horror fans have the chance to see not one but two evil dolls in theaters: Annabelle, the horrific beacon of the “Conjuring” universe, and Chucky, the knife-wielding friend-to-the-end first introduced in “Child’s Play” 31 years ago.

Creepy dolls have a long history in film and TV, but Chucky had the evil-doll lane mostly to himself from 1988 to 2004, with five films that grossed $125 million domestically. Adjusted for inflation to present-day totals, that roughly equates to $251 million.

But this decade, Annabelle has taken over as the top killer doll in Hollywood. Since her debut in 2013’s “The Conjuring,” Annabelle’s decrepit visage has been a major factor in the rise of the “Conjuring” series and in New Line Cinema’s revitalization as a horror house. She’s made beating Chucky look like (sorry)… child’s play, as each of her two films so far have earned a higher box office total than any of Chucky’s five films.

The two previous “Annabelle” films have earned $195 million, and the third should easily push Annabelle’s total box-office haul past Chucky’s. (Please no one tell him.) 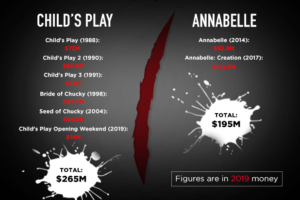 Annabelle’s brand of unnerving scares has made her into the mascot of “The Conjuring” and launched her up alongside The Babadook, Pennywise and the Tethered as one of the 2010s biggest horror icons.

According to data from comScore, the first “Child’s Play” opened to $6.5 million in 1988 on 1,377 screens, and went on to gross $32 million during its theatrical run. In 2019 money, that equates to around $72 million. The following sequels never matched this inflation-adjusted figure. The closest sequel to match the original was “Bride of Chucky,” which earned $32.3 million in 1998 ($62 million in 2019 dollars).

The “Annabelle” films, meanwhile, have enjoyed wider theatrical releases and higher averages than any of Chucky’s films. The first “Annabelle,” released a year after “The Conjuring,” had an opening weekend take of $37 million and an overall theatrical haul of $84 million. The 2017 sequel, “Annabelle: Creation” did even better, with $102 million.

The new “Child’s Play” opened to $14 million, the same amount that the first “Child’s Play” made after inflation adjustment. But “Annabelle Comes Home” is expected to more than double that figure with at least $30 million grossed this weekend.

And so, in the bloody battle of Annabelle vs. Chucky, Chucky can enjoy the higher box office total, in adjusted dollars, as of this writing. But by the time “Annabelle Comes Home” finishes its theatrical run, the three “Annabelle” films should top the combined total of all six “Child’s Play” films.

The king is dead, long live the queen.