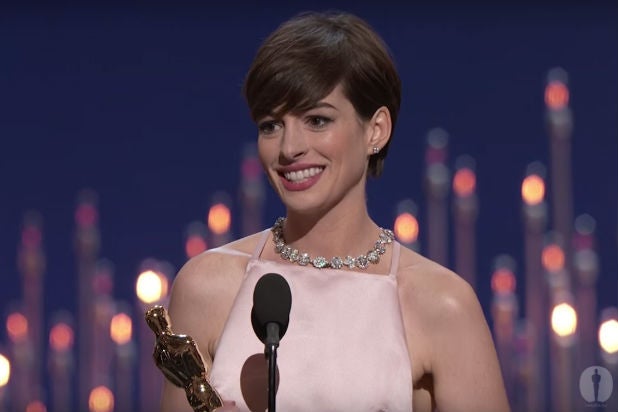 Anne Hathaway is offering fans the real skinny on her weight gain — and attempting to preemptively shut down the fat-shamers in the process.

“Havoc” actress Hathaway took to Instagram on Thursday to post a video of herself working out — and to explain that she’s packing on pounds for professional reasons.

“I am gaining weight for a movie role and it is going well,” Hathaway wrote. “To all the people who are going to fat shame me in the upcoming months, it’s not me, it’s you. Peace xx.”

Hathaway added that she wanted to use the Queen classic “Fat Bottomed Girls” as a soundtrack for the video, but was unable to do so due to copyright issues.

Hathaway didn’t elaborate on which role she’s gaining weight for, though according to the actress’ IMDb page her upcoming projects include “The Lifeboat,” about “a young woman on trial for murder, recounts the tale of how she survived a shipwreck at sea in a lifeboat that initially carried too many people.” So … cannibalism, maybe?

See Hathaway preempt the fat-shamers below.

I am gaining weight for a movie role and it is going well. To all the people who are going to fat shame me in the upcoming months, it’s not me, it’s you. Peace xx PS- I wanted to set this to Queen’s “Fat Bottomed Girls” but copyright said. Continued peace xx