“Since U Been Gone” may be one of Kelly Clarkson’s most famous songs, but that doesn’t mean she immediately recognizes it when it comes on. In fact, the singer dropped to the floor in embarrassment when Anne Hathaway caught it before she did.

In a preview for Tuesday’s episode of “The Kelly Clarkson Show,” Hathaway and Clarkson go head to head in a game of “Sing That Name That Tune,” in which the band plays a song, and the contestants have to pick out what’s playing, then jump in and sing the correct lyrics. Apparently it’s not going well for the host, as she exclaims to her house band, “Can you play a fricking song I’ll know?!”

So, they do. They play Clarkson’s own song for her — but it’s Hathaway who gets in first. You can watch the moment in the video here and above. 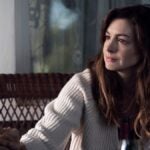 Hathaway seems to recognize it immediately, and comes in strong. As soon as she does, Clarkson falls to the ground in embarrassment, and spends the rest of the performance there. When the Oscar-winning “Les Miserables” performer finishes her set, she bows to Clarkson, who is still gobsmacked that Hathaway recognized it solely based on a few drum beats.

“Should I just quit?!” Clarkson replies. “This is embarrassing!”