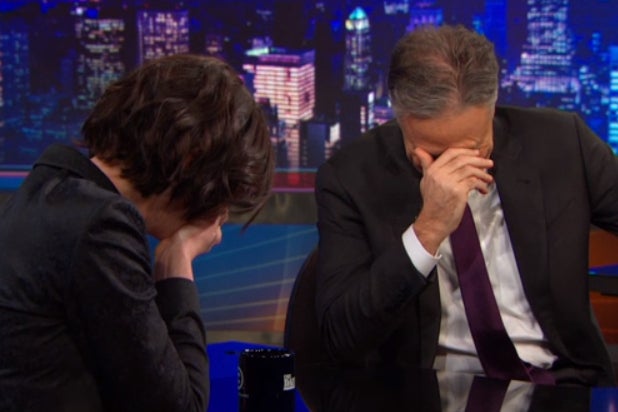 Jon Stewart welcomed Anne Hathaway to “The Daily Show” on Wednesday to promote her anything-but-funny new film, “Song One.” After rolling a super-serious snippet, the actress joined the funnyman at his Comedy Central desk where she somewhat spoiled a major plot point, which the two shared long bouts of silly laughter over.

In the movie, Hathaway plays an older-than-her-years anthropologist, whose younger brother drops out of college and (spoiler alert) gets hit by a car and goes into a coma.

Cut to last night, and the two talents giggling uncontrollably as Hathaway tries to continue with the plot.

“I’ve seen it, and that was still a bit of a spoiler alert,” Stewart said.

“A journalist today told me when that scene came on, he fell off his treadmill,” Hathaway retorted through laughter.

Cue more heavy giggles; they never really got control back after that.

In turn, Stewart then faux spoiled Hathaway’s new play, “Grounded,” which led to — you guessed it — continued cracking up.