Olivia Pope herself couldn’t have devised a more cynical political campaign than the one at the center of the new “Annie”: to wit, a billionaire mayoral candidate temporarily adopts a foster kid for the photo-ops with her and the adorable mutt he buys her, because the wholesome snapshots of the three of them playing in the park will make voters think he’s the most qualified to run America’s largest city.

After the election, once she’s no longer needed, the campaign will discard the girl like so much sour milk. Even Michael Bloomberg only circumvented the law for his political ambitions.

Despite reservations about sharing his cavernous penthouse, cell-phone magnate Will Stacks (Jamie Foxx) agrees to the temporary-guardianship plan thought up by his devilish campaign adviser Guy (Bobby Cannavale). That Will’s assistant and effective angel-on-his-shoulder, Grace (Rose Byrne), never strongly protests this immoral (and dumb) campaign strategy is a sign of the disenchantment, even misanthropy, that seeps through Will Gluck’s reinterpretation of the Broadway classic.

Quvenzhané Wallis’ poofy-haired, flower-trousered Annie remains an eternal optimist, but this child of the system also knows how to play Katniss Everdeen, acutely aware that her survival, or at least her immediate well-being, depends on performing for the cameras. 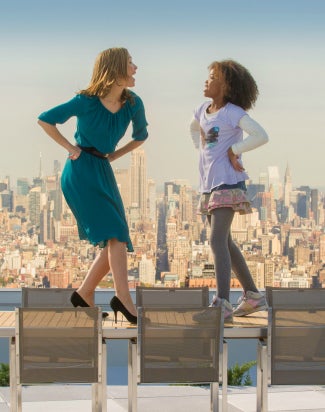 Other hints of darkness – clumsy stabs at realism, really – dampen the musical’s inborn cheeriness without lending it gravitas. But there are still bits of the “Annie” you remember, in particular the joy in synchronized dancing with mops and in pulling one over on witchy Miss Hannigan (Cameron Diaz), Annie’s lush of a caretaker.

And, of course, there’s “Annie’s” perpetual appeal: the fantasy of instant fortune, never more relevant than in these historically unequal times. Gluck and Aline Brosh McKenna‘s shaggy script lightly chides the sneaky way Will really makes his money, but the film is far more interested in what his money can buy: floor-to-ceiling windows, a private helicopter, appliances that read your mind, and invitations to over-the-top movie premieres seemingly designed by Baz Luhrmann for Gatsby Jr., complete with free clothes, giant lollipops, and dancers dressed up like mermaids.

The other concessions to parents fare better. For adult pop-culture obsessives, there’s a long-running series of jokes about  C+C Music Factory and a very funny movie-within-a-movie “directed” by one of the most impressive filmmaking duos working today.

No amount of self-referential jokes can make up for a lack of heart and spirit, and thankfully, “Annie” lacks neither. Wallis is only passable as an actress and a singer here – a fact the film seems to acknowledge by drowning out her vocal performances with thudding musical arrangements. Byrne is ever winsome in an undemanding role shaded by layers of loneliness.

And though we’re never really sure why Will runs for mayor, especially when he offers only a heavily Purelled finger to a potential supporter who wants to shake his hand, Foxx makes us believe that his character is the one that truly needs saving. Even when Guy pushes Annie into a horrifying fate, Foxx is the one we can’t stop watching as he sings and dances circles around the rest of the cast.