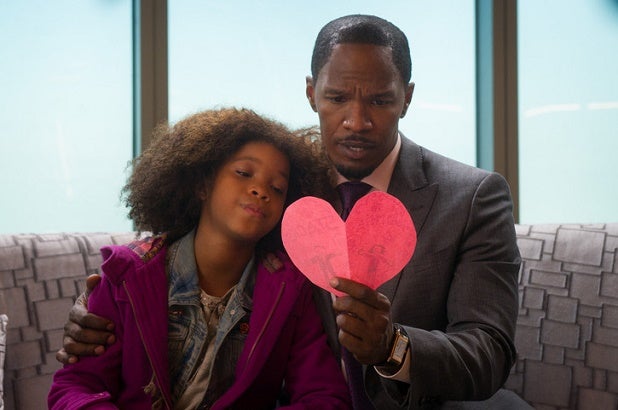 “Annie” didn’t quite break out at the box office this weekend, and it didn’t come close to the No. 1 movie, “The Hobbit: Battle of the Five Armies.” But the solid $16.3 million opening by the musical — a little above pre-release projections — gave hack-attacked Sony Pictures some good news by defying critics and film pirates.

Writer, director and screenwriter Will Gluck’s take on the Broadway hit starring Quvenzhané Wallis and Jamie Foxx was roasted by reviewers and posted online three weeks before its opening as a result of the Sony hacking. And its release came just two days after Sony pulled “The Interview,” in the wake of terror threats.

“Considering all that’s gone on, it’s a very good feeling to see a movie that we love connect with other people that loved it, too,” said Rory Bruer, distribution chief at Sony, which saw the personal data of 47,000 studio employees compromised and executives’ emails plans leaked in the cyberattack.

“We always believed in ‘Annie,’ and we moved its release up a week because we were confident that word of mouth would be good,” he said.

First-night audiences liked it far more than the critics and gave it an “A-” CinemaScore. “Annie,” which co-stars Cameron Diaz, Bobby Cannavale and Rose Byrne, has an anemic 29 percent “fresh” rating on Rotten Tomatoes. But that didn’t stop families from snapping up tickets.

“Family films lend themselves to special appeal, and that’s what the chemistry between Jamie and Quvenzhane delivered,” he said. The “Annie” audience was 76 percent families, and 70 percent women.

It’s hard to quantify the impact of the online posting of the hacked copy but it seemed negligible for the opening, even though “Annie” was download more than 316,000 times, according to piracy tracker Excipio. The musical was illegally uploaded soon after the hack attack, along with Brad Pitt‘s World War II epic “Fury” and three smaller upcoming Sony films.

“We were never too concerned about that,” Bruer said, “mainly because this isn’t the kind of movie that movie pirates tend to go after.”

Now “Annie,” a $65 million co-production of Sony and Village Roadshow Pictures that was produced by Gluck along with Will Smith and Jada Pinkett Smith, has a solid opening to build on over the holiday season.

And Sony has something to talk about besides “The Interview.”