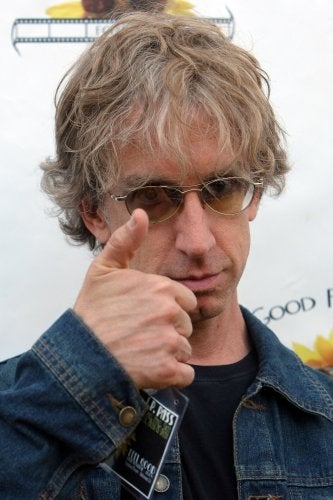 Call the bust another milestone along the course of comedian Andy Dick’s arrested development.

This time Dick was ignominiously popped in a franchise bar named Rum Runners in Huntington, West Virginia – not for wrapping his car around a pole, but, reportedly, for wrapping a hand around two men’s poles.

Dick was detained early Saturday morning at the bar’s entrance long enough to have a wristband attached, whereupon he grabbed the bouncer’s crotch, according to the Associated Press.

For good measure, Dick allegedly did likewise with a patron inside the establishment.

About half an hour later his wandering hands were manacled by police as they took him to jail, where he was booked on suspicion of sexual abuse. He was released on $60,000 bail.

According to §61-8B-7 of the West Virginia Code,  “Sexual abuse in the first degree” can include incidents in which a “person subjects another person to sexual contact without their consent, and the lack of consent results from forcible compulsion.”

The penalty for each count is between one and five years, plus a possible $10,000 fine per charge.

In 2007 Jimmy Kimmel had him forcibly removed from his set after Dick repeatedly touched Ivanka Trump’s hair and legs. In 2008 he was arrested in Riverside County on suspicion of pulling down the top of a teenage girl in a Buffalo Wild Wings restaurant.

He’s currently on probation for that misdemeanor-charged episode.