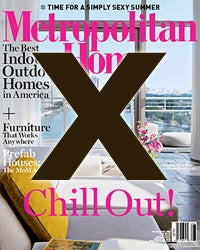 For a few months there, it seemed announcements like these had been slowing down.

Hachette Filipacchi Media U.S., the French-owned magazine publisher, announced today that it will shutter Metropolitan Home. The December issue will be its last. As a result, 12 staffers were laid off, including editor-in-chief Donna Warner.

Metropolitan Home, which had been in business for 26 years, was seen as a bit of a redundant title – since Hachette also publishes Elle Décor. Through September, its ad pages were down 33 percent – a shocking figure, until you consider ad pages are down 27 percent across the entire consumer magazine industry.

“It is with a feeling of sadness that I make the announcement to close one of our magazines,” Alain Lemarchand, Hachette’s CEO, said Monday. “However, we believe the best strategy in the upscale shelter segment is to boldly focus our resources and investment on Elle Décor, which is the ad-page leader within the U.S. market.”

And unlike other publishers, when Hachette closes magazines, it kills their websites, too.