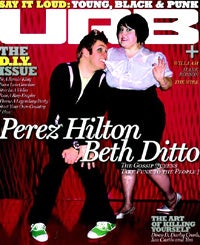 Another one bites the digital dust.

Urb, an award-winning music and alternative culture magazine, is going on print hiatus.

The Los Angeles-based title, besieged by the same hemorrhaging print advertising market as the rest of the industry, is set to publish its first digital-only issue. The next print issue won’t come until at least 2010 “so we can see what the future of ink on paper should really look like,” Urb said in a note to subscribers.

“This autumn, for the first time in our 20 year history, URB Magazine will release our first all digital issue. URB #159 will hit the ’streets’ later this month and feature 25 must-know artists breaking onto the scene. In the spirit of our lauded Next 100, our 25: NOW! issue will be a reference guide to what’s next.

As for our print edition, we’re taking a hiatus until 2010 so we can see what the future of ink on paper should really look like. In the meantime, we’re thrilled about a major URB.COM relaunch (this month!) and bringing a ton of digital initiatives to you and our readers.”

I asked Raymond Roker, Urb’s publisher, for some perspective. Here’s his response, via e-mail:

"Print is for the hearty folks that can tie it into a dozen other business units to keep it afloat while a waning audience looks elsewhere for stimulation and information. We’re just no longer interested in struggling through a deep ad recession when we could be flying above it on the Interweb or your iPhone.

I honestly think that a music magazine is a bit of an oxymoron at this point in time. As beautiful as artists on pages are to look at — and we produced many of those beautiful pages over our 20 years — how is putting all the effort into a print magazine about digital music making any sense today? Music is all about sharing, hearing, experiencing, watching and producing. None of this happens in the pages of a magazine. Never has. It was only an option when that’s all there was. And, most importantly, virtually all of this is better handled online. So that’s where we’ll be.

As for our business, it’s a challenging year for all of us, and we have taken our lumps. But our brand is strong, our place in the market is unique and we’re incredibly psyched about 2010 and beyond. Like I said, there has never been a better time to get into media and we plan to take part in every sensible channel to connect with our audience. We’re smaller in some ways, much larger in others. Print was our legacy product and, at least in its current state, it’s run its course. Who knows what tomorrow holds though. Anybody who claims to is an idiot."

Urb is just the latest music title to be rocked by the recession. Blender, Harp, No Depression and Vibe all folded in the past couple years – although Vibe and Harp (under its new banner, Blurt) are making comebacks.

Paste, one of Urb’s competitors, launched a "Save Paste" campaign earlier this year, soliticing donations from its readers to stay in business.

Relix, another alternative music title, was near death before some of its employees found an investor to save it.