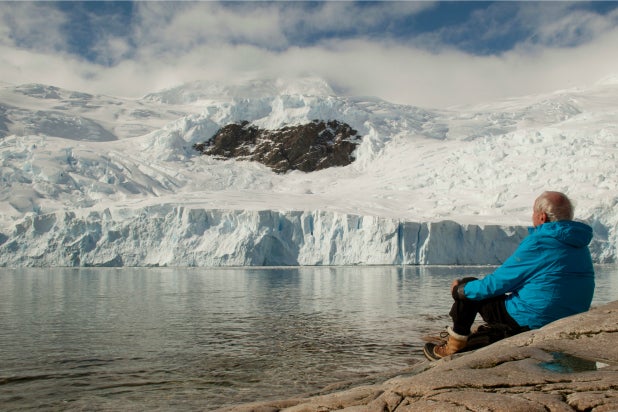 Luc Jacquet’s documentary “Antarctica: Ice & Sky” comes to praise Claude Lorius, the now-84-year-old glaciologist who was the first researcher to discover a link between greenhouse gases and global warming. But Jacquet (“March of the Penguins”) goes several steps further and deifies him — and if Lorius had a hand in shaping the film’s earnest, often purple, and utterly irritating first-person narration, he effectively buries himself.

French actor Michel Papineschi, not Lorius, provides the voiceover, though there’s no indication that you’re not hearing the scientist tell his own story. You may be surprised to find that “Ice & Sky” is not so much an insight into a piece of history as it is hagiography.

After the visual of an ominous shadow growing bigger and bigger on a piece of ice (metaphor alert!), the film begins with Papineschi explaining how he — I mean Lorius — became an Antarctica enthusiast at the age of 23.

While the narrator talks (and talks and talks), the glaciologist vogues on his favorite continent, mostly staring off in the distance but at one point posing in an unmistakably heroic way. The highlights of these shots, however, comes when the drone capturing the aerial footage pulls back; Lorius is just a speck as he looks out into the spectacular, well, ice and sky, sometimes standing knee-deep in water that likely wasn’t there when he signed on for his first expedition. The latter is a touch heavy-handed, but let’s cut Jacquet a little slack; the image does get the message across.

Regarding the way-back footage, you would assume that it must be a re-creation of each of Lorius’s research trips. Remarkably, however, it’s the real deal, starting with his first expedition in 1956 that began as a lark but then ignited a passion.

The downside is that the tape of each subsequent journey becomes as boring as your least favorite class, and the film slogs for a while; the research conducted by Lorius and his various teams was incremental and occurred over decades, and you feel it. (And when things get too dull? Here’s a bunch of penguins!)

Eventually, Jacquet strikes gold as Lorius comes closer to his discovery. With the ice cubes in a glass of whiskey serving as inspiration, Lorius sets out to study the bubbles that appear in the cylinders of ice he’s been pulling out of great depths.

He theorized that they represent a precise moment in time: “Ice is a veritable natural planetary clock,” he confirms. Lorius and his team were able to date every nuclear explosion via ice samples and even probed deeply enough to find ice from the first Ice Age. They unlocked 40,000 years of climate history.

You’d think that this is the time when the narration would reach a fever pitch. But that can’t happen when Papineschi has been speaking with such emotion all along. To wit, of Lorius’ first expedition: “I could still feel the cold I refused to yield to and smell the mix of salt, frying oils and burnt diesel that lifted my heart!” Later, when his research got more intense under increasingly horrible conditions, Papineschi yelps, “Describe, understand! Describe, understand! Describe, understand! The quest for knowledge keeps us sane!” It’s not much better when he attempts some winking humor. “[Antarctica is] one of the most inhospitable places on Earth — except for glaciologists.” Wah-wah.

If you can block out that verbal frenzy, though, the last chapters of “Antarctica: Ice & Sky” are, finally, a compelling narrative (who wouldn’t be interested in the idea of “fossil air?”) and yet another scientific explanation of global warming. “We are altering our planet’s climate at a rate never before seen in history,” the narrator says. “The message is indisputable.”

Naturally, there’s a call to action at the end of “Ice & Sky.” But prior to that, there’s something more critical, a question that sums up a sad present-day truth: “What good is recognition if the warning goes unheeded?”