It was one of Anthony Bourdain’s closest friends who found him unresponsive in his hotel room on Friday morning.

Éric Ripert, a famed chef in his own right whose flagship New York restaurant Le Bernardin holds three Michelin stars, honored Bourdain after his death by suicide at the age of 61.

“Anthony was my best friend,” tweeted Ripert on Friday, adding, “An exceptional human being, so inspiring & generous. One of the great storytellers who connected w so many. I pray he is at peace from the bottom of my heart. My love & prayers are also w his family, friends and loved ones.”

Anthony was my best friend. An exceptional human being, so inspiring & generous. One of the great storytellers who connected w so many. I pray he is at peace from the bottom of my heart. My love & prayers are also w his family, friends and loved ones. pic.twitter.com/LbIeZK14ia

Ripert would appear from time to time on Bourdain’s CNN travel series “Parts Unknown,” in one episode sampling an array of fine cheeses in Marseilles, France, with Bourdain before jetting off to the countryside for a picnic, complete with delicious French wine.

The French chef also appeared multiple times on the late author and foodie’s “No Reservations” show. 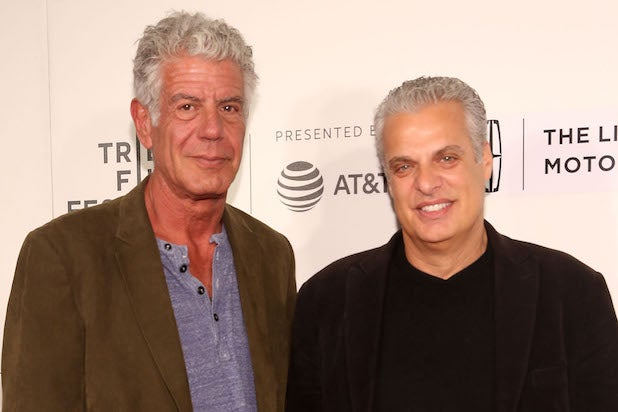 CNN, which confirmed Bourdain’s death, is now faced with the difficult decision of what to do with his hit show “Parts Unknown.” The channel announced Friday that a series of tributes is set to run all weekend in honor of the late star and shared that the next episode of “Parts Unknown” would air on schedule Sunday with a special introduction from Anderson Cooper.

Bourdain was on assignment for “Parts Unknown” when he was found dead in his hotel room in Paris.

“His love of great adventure, new friends, fine food and drink and the remarkable stories of the world made him a unique storyteller,” the network said in a statement. “His talents never ceased to amaze us and we will miss him very much.”

Bourdain is survived by his 11-year-old daughter, Ariane. He was dating Italian actress Asia Argento, who shared her grief in a statement on Friday. “He was my love, my rock, my protector. I am beyond devastated,” said the actress.