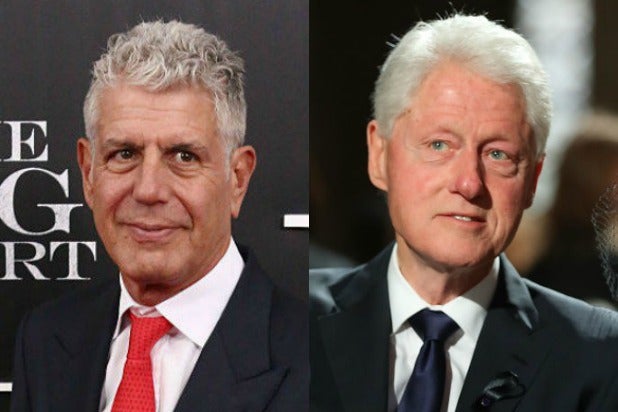 In an interview three months before his death, Anthony Bourdain criticized Bill and Hillary Clinton for how they handled the accusations of sexual harassment that rocked the former president during his time in office.

“It was f—ing monstrous. That would not have flown today,” Bourdain said of President Clinton’s affair with Monica Lewinsky and his and Hillary’s handling of it afterwards.

In an interview in Popula which was published posthumously on Sunday evening, Bourdain called the former president “a piece of s—. Entitled, rapey, gropey, grabby, disgusting, and the way that he — and she — destroyed these women and the way that everyone went along, and, and are blind to this! Screamingly apparent hypocrisy and venality.”

Bourdain said that he disagreed with the decision to initiate impeachment against Clinton but added that he would “never under any circumstances vote for Bill Clinton today.”

He also criticized the Clintons for their response last year to the sexual harassment allegations levied against Harvey Weinstein, their friend and political donor.

“People were really hoping she’d come out with a… I don’t know. Let’s just say with something different. I immediately tweeted my disappointment, very much shaped by what I saw around me. And I will tell you, that was really f—ing frightening, the reaction to that. You know, I voted for her,” Bourdain said.

Bourdain’s girlfriend Asia Argento was one of the first women to come forward with accusations of sexual assault by Harvey Weinstein. She was dating Bourdain when he was found unresponsive in a hotel room in France last month.

In the interview, Bourdain discussed his desire to see Weinstein “beaten to death in his [jail] cell” and also shared his theory of how Weinstein would eventually die.

“My theory of how he goes is, uh, he’s brushing his teeth in a bathroom, he’s naked in his famous bathrobe, which is flapping open, he’s holding his cell phone in one hand because you never know who on the Weinstein board has betrayed him recently, and he’s brushing his teeth — he suddenly gets a massive f—ing stroke — he stumbles backwards into the bathtub, where he finds himself um, with his robe open feet sticking out of the tub, and in his last moments of consciousness as he scrolls through his contacts list trying to figure out who he can call, who will actually answer the phone. And he dies that way, knowing that no one will help him and that he is not looking his finest at time of death.”