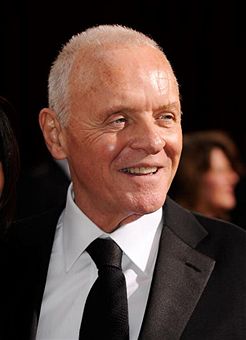 "The Wolfman" star Anthony Hopkins is set to continue his scenery-chewing ways.

The Oscar-winning actor is in final negotiations to play the evil sorcerer Pharotu in Chuck Russell’s 3D action-adventure film "Arabian Nights," according to the Hollywood Reporter.

Liam Hemsworth stars as a young commander who joins forces with Sinbad, Ali Baba and the Genie from the magic lamp to rescue his queen, Scheherazade, after his king is murdered in a coup. The part of Scheherazade hasn’t been cast yet but expect some gorgeous yet interchangeable young starlet to play the damsel in distress.

As for Pharotu, the magic-obsessed character is responsible for the death of a mermaid who Sinbad loved, so prepare to see some sweet sword-driven revenge in 3D. Hopkins has been coasting in mostly commercial projects the last few years but regardless, his casting is a major coup for the estimated $70 million production.

Hopkins next appears opposite Naomi Watts and Josh Brolin in Woody Allen’s Cannes entry "You Will Meet a Tall Dark Stranger." He recently wrapped a turn as Odin, the title character’s father, in Kenneth Branagh’s "Thor," and is currently in Hungary filming Mikael Hafstrom’s exorcism thriller "The Rite" with "Captain America" villain Toby Jones, Ciarin Hinds and Alice Braga.

Filming on "Arabian Nights" is scheduled to begin later this summer.