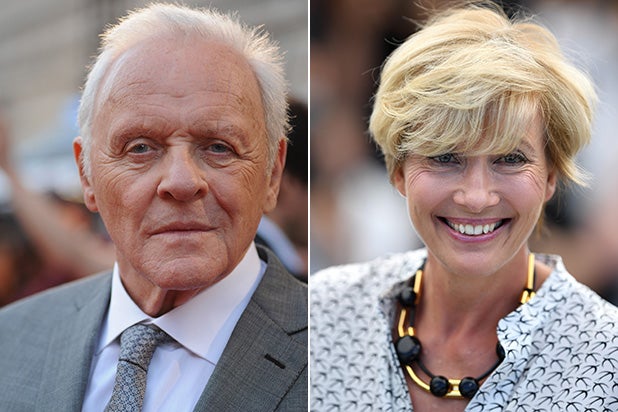 An all-star cast joins an upcoming adaptation of William Shakespeare’s “King Lear,” which will air on BBC Two and Amazon Prime in 2018.

Oscar winners Anthony Hopkins and Emma Thompson are reuniting for their third collaboration together in the production. Hopkins will play the titular ruler while Thompson will play his eldest daughter, Goneril.

This version will take place in an alternate present-day reality where Lear presides over a military dictatorship in England. In the play, an elderly king who’s descending into madness makes the decision to split his kingdom among his three daughters, which sends the land into chaos.

Joining Thompson as Lear’s other daughters are Emily Watson (“Theory of Everything”) as the middle daughter Regan and Florence Pugh (“Lady Macbeth”) as Cordelia, the youngest.

“King Lear” will also star Jim Broadbent (“Gangs of New York”) as the Earl of Gloucester, Andrew Scott (“Sherlock”) as his son Edgar and John Macmillan (“Hanna”) as his illegitimate son Edmund.

Other castmembers include Jim Carter (“Downton Abbey”) as the Earl of Kent, Christopher Eccleston (“The Leftovers”) as Oswald, Tobias Menzies (“Outlander”) as the Duke of Cornwall, Anthony Calf (“Riviera”) as the Duke of Albany and Karl Johnson (“Rome”) as Lear’s jester.

BAFTA Award winner Richard Eyre (“Notes on a Scandal”) will be directing the TV movie.

“It is a tribute to the great Richard Eyre that we have brought together such a remarkable cast. The film is a testament to the BBC’s on-going commitment to the single drama, and we are very appreciative of their continued support,” executive producers Colin Callender and Sonia Friedman said.

“King Lear” was commissioned by Charlotte Moore at the BBC and will air on BBC Two. It’ was produced by Playground (Wolf Hall”) and Sonia Friedman Productions in association with Lemaise Pictures Limited. It is a co-production with Amazon Studios.

Other producers include Scott Huff and Lucy Richer.

14 Famous People Who Died on Their Birthday, From Shakespeare to Ingrid Bergman (Photos)