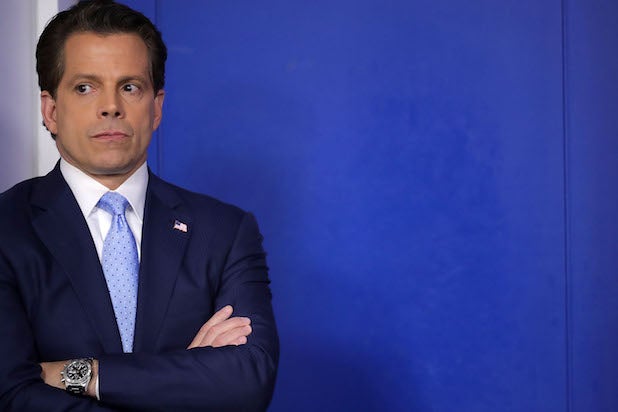 Anthony Scaramucci says New Yorker writer Ryan Lizza — the reporter who helped cost him his job as White House communications director — is a “lowlife” and this year’s Linda Tripp.

“.@RyanLizza is the Linda Tripp of 2017,” the Mooch tweeted. “People know. And he is up at night not being able to live with himself.” He added that Lizza “absolutely taped the call without my permission,” using the hashtag “lowlife.”

Scaramucci will get to elaborate when he appears Monday on CBS’s “Late Show With Stephen Colbert.”

Also Read: Anthony Scaramucci Is Set to Appear With Stephen Colbert on the 'Late Show'

Tripp became friends with Monica Lewinsky at the Pentagon’s public affairs office. On the advice of a friend, Tripp began secretly recording her phone calls with Lewinsky in which she discussed her affair with then-President Bill Clinton.

The tapes helped lead to Clinton’s impeachment after Tripp handed them over to independent counsel Kenneth Starr. Tripp also convinced Lewinsky not to wash the infamous blue dress on which Clinton left some damaging… ahem… DNA evidence. She was granted immunity from prosecution for her help in the investigation.

Last month Scaramucci famously  placed a phone call to Lizza, a reporter for the New Yorker, in which he employed a string of expletives to rant against White House Chief of Staff Reince Priebus and Trump’s chief strategist, Steve Bannon.

Also Read: The Rise and Fall of Anthony Scaramucci: a Timeline

As TheWrap reported earlier, Lizza’s story became the most read article of 2017 so far.

The timing of his tweet might come as a welcome surprise to Amazon Studios which bought the rights to “Linda and Monica,” a movie about the two.

The film’s script, based on actual conversations between Lewinsky and Tripp, was included on the 2016 Black List, the annual rundown of Hollywood’s top screenplays that have yet to be produced.

.@RyanLizza is the Linda Tripp of 2017. People know. And he is up at night not being able to live with himself.

Yes. He absolutely taped the call without my permission. #lowlife https://t.co/fTDcBw4vcT