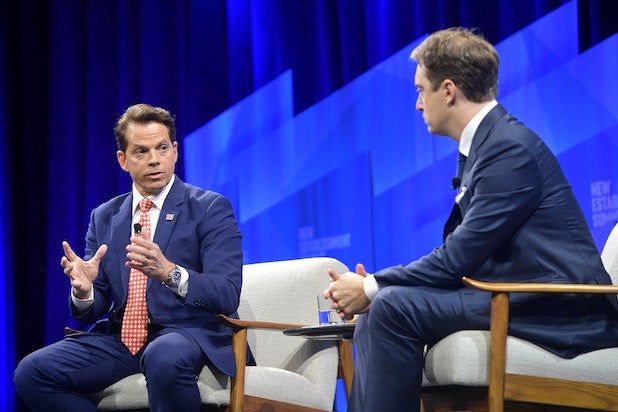 Former White House communications director Anthony Scaramucci predicted that President Donald Trump will be impeached and removed from office — or that he will resign — by the 2020 presidential election.

“He’s going to get impeached,” Scaramucci said during a panel at Vanity Fair’s New Establishment Summit on Tuesday. “I predict he will be out of office before the next election.”

“He’s literally turned our foreign policy and elements of our domestic policy and our national security system into a world of personal transactions,” he continued. “I do believe he’s cornered now and as the facts unfold, they’re so overwhelming in their criminality that he’ll be out of office.”

In recent months, Scaramucci has emerged as one of the few Republican voices of dissent during the Trump presidency. He described Trump’s behavior as being that of a “demagogue” and a fascist, pointing to the philosopher and critic Umberto Eco’s list of the common features of fascism.

“He may not have early-stage dementia, but he definitely has early-stage fascism,” he said.

A self-described “establishment Republican,” Scaramucci said he felt compelled to speak out because he believes the country is in a “full-blown constitutional crisis” and that Trump has displayed “lawless behavior” that is being “fully exposed” through the ongoing impeachment inquiry.

“We have a character integrity test going on right now for many of our elected officials,” he said. “Are they going to rise above their partisanship?”

Scaramucci also called on other civilians, especially Republicans, to speak up against Trump.

“Speak. Act. You know it’s wrong,” Scaramucci said. “Force the people around you who are watching too much of this propaganda nonsense to see the reality [of what’s happening].”

Scaramucci, who said he has owned up to his mistakes for supporting Trump and for his 11-day stint at the White House, believes that there needs to be an “off-ramp” for others who similarly want to withdraw their support from the president. He also said that figures like Ivanka Trump and Jared Kushner, both senior advisers to Trump, also need to reconsider their own “mistakes” if they want to have a “second act” after the White House.

“There is no crisis-management team that’s going to help them,” Scaramucci said. “If you’re resilient and you own your mistakes, there’s a second act in America. Jared and Ivanka, they better own their mistakes if they want that. Otherwise, it’s going to be very rough for them.”