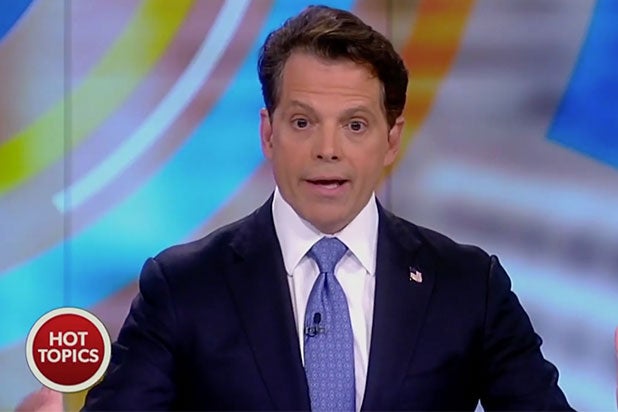 Former White House Communications Director Anthony Scaramucci says he will not follow his former West Wing colleague Omarosa  Manigault into reality television and that he had already rejected multiple offers.

“I have been offered more than one reality show,” Scaramucci told TheWrap during an interview from the offices of his investment firm, Skybridge Capital. “I’ve said no to all of them.”

He declined to say which shows had come calling.

Scaramucci said that while he was very flattered by the idea, it wasn’t his thing, and he was worried about becoming a prop in liberal mockery.

Also Read: Scaramucci Chides Trump on Alec Baldwin's 'SNL' Impression: POTUS 'Should Expect to Be Made Fun Of'

“I think Jon Stewart wanted me to wear a chicken suit or something like that at some fundraising event and I was like, ‘ok, that’s not me,’ said Scaramucci. “I’m not wearing a chicken suit, you know, I think that’s like what the left likes to do with people that support Trump is they want to dehumanize you.”

To that end, the financier was sharply critical of his predecessor Sean Spicer’s cameo at the 2017 Emmys.

“I think Spicer rolling out the press podium at the Emmys, I think he would probably look at that and think that was a mistake in hindsight,” he said.

Scaramucci, took a dim view of Hollywood in general, saying that events like the Oscars (which he hasn’t watched in years) have become vapid and out of touch.

“I think they are making a very big mistake by overly politicizing the situation. I think that you’re losing half your audience by doing that,” he said. “I think it’s a mistake. Focus on your entreatment skills; focus on who you are.”

While you won’t see him on “Celebrity Big Brother” or “Dancing With the Stars,” The wily New York businessman has proven adept at remaining in the spotlight. Despite leaving the White House after just days on the job, he has remained a regular on CNN and Fox News. Earlier this week, news emerged that he had inked a book deal with Hachette, which he said would clear up misunderstandings people had about the president.

“The Blue Collar President: How Trump Is Reinventing the Aspirational Working Class,” is due out in September.

“I also came from a blue collar family and I see how well the president identifies with the people I grew up with,” said Scaramucci. “I think the president is misunderstood by a lot of people, particularly intellectual elites. They are either tone deaf or they misunderstand him, and I think that there is a brilliance of what he has been able to put together in such a short period of time.”