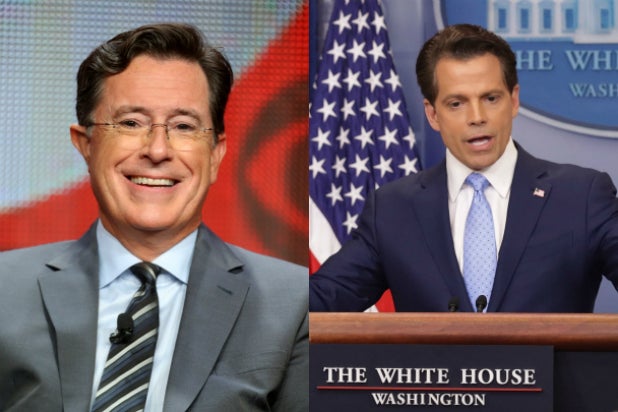 Is it time for some “front stabbing?”

Stephen Colbert has booked Anthony Scaramucci, the former White House Communications Director, as his guest on “The Late Show” next Monday.

Get ready for some F-bombs, as Colbert tweeted out the news and told CBS to get their censors ready.

On Monday 8/14 Anthony Scaramucci will be my guest on @colbertlateshow. This is just a heads up for our censors to get ready! #themooch

Scaramucci, nicknamed The Mooch, was a favorite target of Colbert for the 10 days that he was in the White House.

The late-night host latched onto his vulgar interview with Ryan Lizza in The New Yorker and his “front-stabbing” comment, even going as far as to dedicating an In Memoriam tribute to him.

Also Read: Anthony Scaramucci Gets One Last Parting Gift From Trump on His Way Out the Door

Colbert’s other guests on Monday will be Bob Odenkirk and musical guest Liam Gallagher (who’s known to drop a few F-bombs of his own).