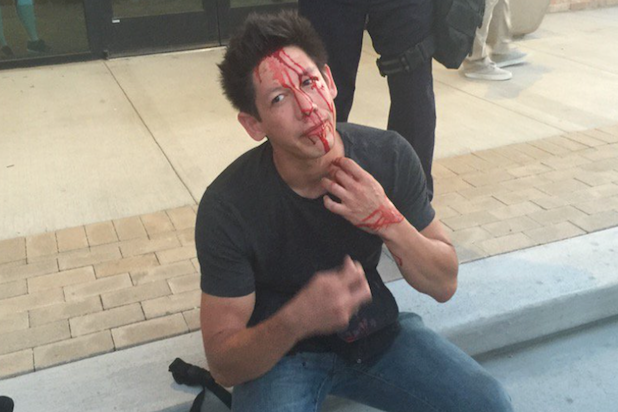 Anti-Donald Trump protestors became violent outside a Dallas, Texas, campaign rally and a photojournalist was bloodied after being hit in the head with a rock.

Dallas Advocate photographer Danny Fulgencio was struck by a rock thrown by an anti-Trump protestor, according to Gateway Pundit.

Fulgencio was treated by medics and returned to work after 15 minutes with a large bandage on his head, according to Scott Gordon of NBC’s Dallas affiliate. Fulgencio is reportedly OK.

Gordon later tweeted that the rock thrower was “never caught.”

Update: Dallas Advocate photographer Danny Fulgencio, hit with rock at Trump rally, was treated by medics and is OK pic.twitter.com/T4VU7y9hlq

Photographer Danny Fulgencio back on the job. 15 min after getting hit with rock thrown by protestor @wfaachannel8 pic.twitter.com/2QnLn86ViI

“Amazing crowd last night in Dallas – more spirit and passion than ever before. Today, all over the great State of Texas!” Trump tweeted early Friday morning. He is scheduled to hold another rally tonight at The Woodlands Waterway Marriott Hotel & Convention Center outside Houston.