Tensions between Cleveland police and anti-Trump anarchists reached a boiling point on Tuesday during a tense protest that occurred just as the Republican party began its roll call vote to officially declare Donald Trump its presidential nominee.

The scuffle broke out at Cleveland’s Public Square blocks from the site of the convention as self-described masked anarchists held signs that read “Racist Scum Out.” The impromptu demonstration was met with a sea of police officers on bikes who chased them for several blocks.

At one point, officers formed a barrier between reporters and the anarchists in an effort to keep the peace. The confrontation was short but tense (watch the dramatic video above). There were no  arrests made.

Earlier in the day, three women were arrested after climbing a flagpole near the Rock and Roll Hall of Fame after hanging an Anti-Trump banner that read: “Don’t Trump our communities.” 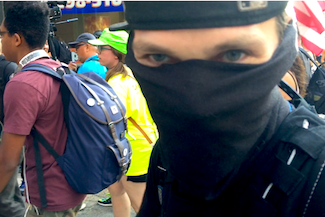 Asked what they were protesting, one masked demonstrator told TheWrap: “We’re just a group of people, man. We don’t like people who hate.”

The young man, wearing a bandana on his face, said the group wasn’t doing anything to provoke police.

“The cops just swarmed us when we hit Public Square,” he said.

But a police officer who was standing nearby told TheWrap they were just there to ensure the public’s safety.

“If you are a member of a group that causes you to have to hide your face, then you probably need a different cause,” Williams said. 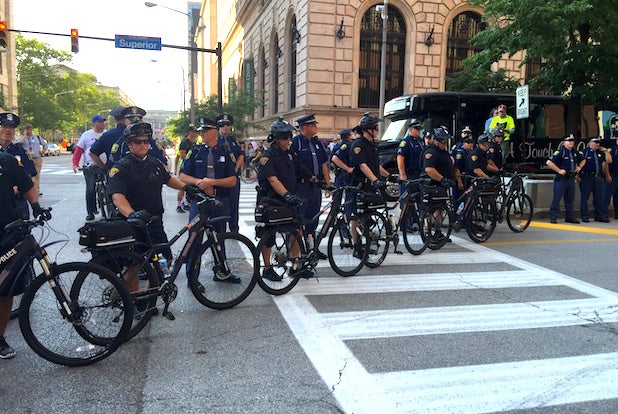 On Monday, hundreds of anti-Trump demonstrators took to the streets of downtown Cleveland minutes before the GOP convention began. At least 900 people showed up for the protest, many traveling thousands of miles, according to organizers.

Protesters chanted, “No Trump, no KKK, no racist U.S.A.,” and “Black Lives Matter!”

“I’m here today to tell Donald Trump and the RNC they need to spread love and not hate,” said one protester who flew in from Wisconsin to attend the march.

Meanwhile, about 200 Trump supporters gathered at a downtown area park for an “America First” rally. A few Trump backers openly carried guns at the outdoor rally, a choice allowed under Ohio law.

Jesse Gonzales, a 26-year-old construction worker from Lakewood, Ohio, told TheWrap he was brandishing his American-made AK-47 over his shoulder, “Because I can. It’s the law and I can do so. Also, most importantly, if you stop exercising your rights, they take it away.”