“Springsteen on Broadway,” the Bruce Springsteen concert performance that on Saturday became the first Broadway production to reopen post-pandemic, was greeted with protests outside the theater from those who weren’t allowed in due to their vaccination status — or rather, lack thereof.

A small group of protesters gathered outside the St. James Theatre, shouting and holding signs that said “Unmasked, unvaxxed, unafraid,” “No vax passports,” and “Bruce Springsteen is for segregation on Broadway.”

The show requires audience members to show proof of being fully vaccinated with an approved vaccine from the CDC or WHO. With that info provided, no masks were required. Guests under 16 were one of two exceptions to the vaccination mandate, along with “those who need reasonable accommodations due to a disability or sincerely held religious belief.” That said, the latter group had to show proof of a negative COVID test and wear a mask. 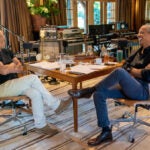 Jujamcyn Theatres, the company that operates the St. James, stands by the decision, even after the protests.

“One of the things we’ve learned this year is that the health of each of us depends on the actions of all of us,” Jordan Roth, President of Jujamcyn, tells TheWrap. “My health depends on you, and yours on me. That’s what it is to live in a community.”

“Springsteen on Broadway,” which is based on the rock singer’s 2016 autobiography “Born to Run,” features Springsteen narrating chapters of his life as well as performing on guitar and piano.

The show’s original run saw 236 sold-out performances, and scored Springsteen a Special Tony Award. The post-pandemic revival is set to have a limited run through September 4.

Proceeds from re-opening night will be donated to a group of local New York and New Jersey charities.