Rep. Alexandra Ocasio-Cortez is firing back at Sarah Palin after the former vice presidential candidate called her a “fake feminist.” In short, her reply: Cry about it.

During an appearance on Fox News, Palin slammed AOC for her criticisms of Texas governor Greg Abbott and his defense of the state’s restrictive abortion law. Citing the the U.S. Representative’s comment that Abbott is “not familiar with a menstruating person’s body,” and therefore should not be regulating one, Palin called AOC “such a fake feminist that she would bring up an issue like this and try to use it to make some kind of political point.”

On Thursday, Rep. Ocasio-Cortez responded on Twitter, writing “I’m so sorry Sarah Palin is mad at me! In fact, to address this I set up a special hotline just for her” alongside a video she posted to an Instagram story. 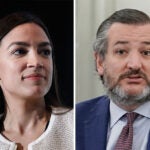 “Does my existence make you mad?” Ocasio-Cortez said. “Does the fact that, yes, I am a mouthpiece for the people of New York’s 14th congressional district upset you? Well, I have help for you. Call 1-800-CRY-NOW. That’s 1-800-CRY-NOW.”

AOC then added a second tweet, saying “In fact, we also set up a corresponding website – proceeds go to abortion and reproductive health providers in Texas.” The tweet indeed linked to a donation page, directing funds to 10 different abortion funds. According to Ocasio-Cortez, more than $250,000 has been raised so far.

Reps for Palin did not immediately respond to TheWrap’s request for comment and as of this writing, she had not responded to Ocasio-Cortez’s words on Twitter.