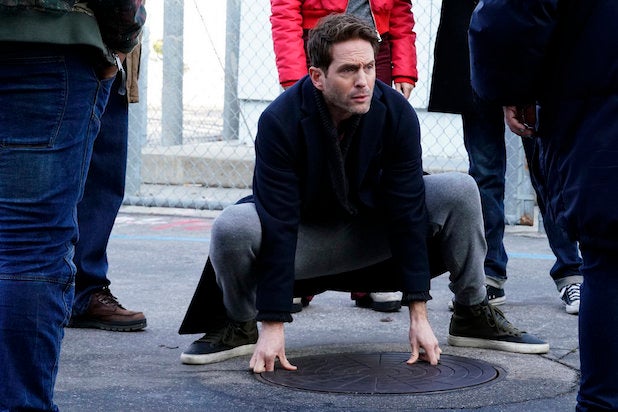 Patton Oswalt would really like you to spend your Memorial Day weekend binge-watching “A.P. Bio” on Hulu, as he and costar Glenn Howerton are leading a hashtag campaign to help find the recently cancelled NBC comedy a new home.

Oswalt and Howerton have called on the show’s cult fanbase to get #SaveAPBio trending on Twitter and to help get the show to the top of Hulu’s streaming metrics. The show stars Howerton as Jack Griffin, a disgraced Harvard scholar who is forced to return to his hometown of Toledo, Ohio, and teach an advanced placement biology class.

But as he realizes that his students are among the best in the school, Jack hatches a scheme to use them to simultaneously get revenge on those who cost him his spot at Harvard and find his way back into the upper echelons of academia.

I mean, there’s no better way to spend Memorial Day than binge-ing @NBCAPBio on @hulu. Who KNOWS what might happen if those numbers spiked? Whoooooo knows? #SaveAPBio #BingeBioOnHulu pic.twitter.com/73VQt9FYSx

“After we heard the news that ‘A.P. Bio’ had been cancelled, I felt frozen,” tweeted Mary Sohn, who plays art teacher Mary Wagner on the show. “So when Patton Oswalt started #SaveAPBio I felt scared to feel upset all over again. Then I saw the outpouring of love and support and I’m reminded this beloved show is worth the fight.”

In the era of social media and streaming, it has been common for fans of a cancelled show to take to Twitter to push for it to be saved. The most publicized in recent years was the cancellation of “Brooklyn Nine-Nine” by Fox, which was met with online outrage by fans that soon turned to joy after NBC picked it up. Other shows saved from oblivion include “Designated Survivor” and “Lucifer,”  which moved to Netflix after their respective cancellations by ABC and Fox.

Check out more #SaveAPBio tweets from fans and cast members below.

Save #SaveAPBio because this line alone should earn them 11 more seasons pic.twitter.com/fqVGvlkcIv

I refuse to accept AP Bio’s cancellation. The show is too funny and we need comedy now more than ever. Rarely do comedies hit the ground running as well as this show. I know I’m biased because I got to work on it but I loved the show before I ever stepped foot on set. #SaveAPBio

I’m not supposed to say anything, but Marcus has a college girlfriend. If we #SaveAPBio I promise we will meet her in season 3.

#SaveAPBio cause I need a mission dedicated to my girl Heather getting her first kiss with Dan Decker. pic.twitter.com/p7BW3zmkvP

#SaveAPBio Unfortunately I fell behind on watching the show. But I just got caught up in Hulu. The show is really hitting it's stride and I love it. I audibly cackled when Durbin walked out hands up, accepting the fate of a serial litterer. @pattonoswalt