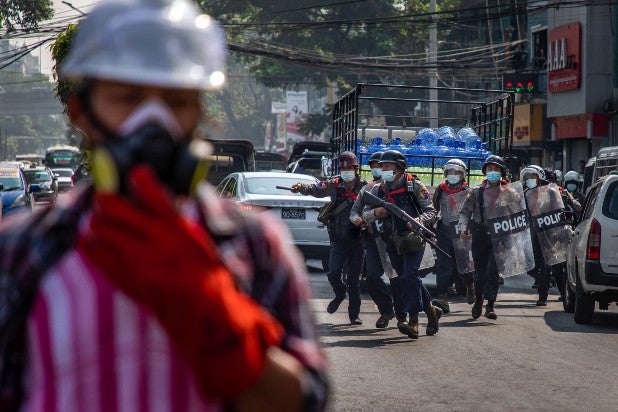 An Associated Press reporter arrested in Myanmar on Saturday while covering the ongoing protests against the country’s military dictatorship was charged Tuesday under a law designed to criminalize dissent and restrict journalists.

Thein Zaw, 32, and five other journalists have been charged under a public order law that, according to AP, “punishes anyone who causes fear among the public, knowingly spreads false news, or agitates directly or indirectly for a criminal offense against a government employee.” The charges carry a sentence of up to three years.

The journalists were covering one of the protests that have erupted in the South Asian country since Feb. 1, when the military overthrew the government in a coup d’etat just one day before a newly elected government was to be sworn in. The junta declared the 2020 election invalid based on fraud claims, imposed a state of emergency on the country currently set to last a year, and arrested the leaders of the winning party.

Also Read: Murdoch's NY Post Calls Out Trump's 'Shameful' Refusal to Concede: 'Give It Up'

Since then the country has been rocked by almost daily mass protests, which the military dictatorship has countered with violence, arrests of hundreds of people, media and internet blackouts. Most recently, the United Nations believes at least 18 people were killed by authorities on Sunday. The regime has also changed laws to make previously legal behavior a crime – including the public order law under which Zaw has been charged.

According to AP, Zaw has been remanded into custody and can be held until March 12 without another hearing. AP has denounced the arrest demanded his release.

“Independent journalists must be allowed to freely and safely report the news without fear of retribution,” Ian Phillips, AP vice president for international news, said after the arrest. “AP decries in the strongest terms the arbitrary detention of Thein Zaw.”

On Wednesday, the AP posted video of Zaw’s arrest, which you can watch below.