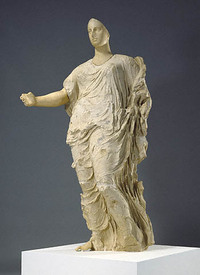 This is Aphrodite, they think. She is the Getty Museum’s most prized classical sculpture, the only example in this country of a cult statue, meaning the figure that stood in the midst of a temple in ancient times, worshipped as the deity herself. But she, just like a heartstopping gold wreath that just went back to Greece, will probably be leaving the museum soon. I explain why in a piece in Saturday’s paper: "The Getty has not reached a formal conclusion based on the conference, which was convened at the museum on Wednesday and was closed to the public. But museum officials and some of the experts who attended said their discussions buttressed what the museum says are its own suspicions that the statue, acquired by the Getty in 1988, might have been illegally excavated in southern Italy. (Here’s the rest.)

And further on the topic of headache-inducing requests from source countries, our pal Zahi Hawass, Egypt’s chief of antiquities, is making lots of noise about the five pieces he wants returned — loaned, is what he calls it, for the moment — to Egypt. One is the Rosetta Stone, at the British Museum, another is the famed bust of Nefertiti (see her to your left on my blog) in Berlin. The Boston Museum of Fine Arts also has a piece that he wants back. This is the start, not the end, of a new chapter in east-west cultural relations.