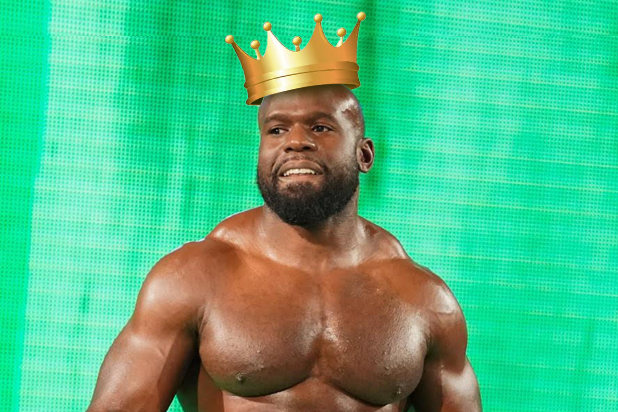 Apollo Crews isn’t “satisfied” with where his WWE career is to this point, he tells TheWrap, but a “King of the Ring” win could change all of that.

“I wanted to come in here and shock the world, I guess you could say. I felt like I would have done much more at this moment in my career,” Crews told us ahead of Tuesday’s “SmackDown Live.” “But I’m still young — I’m about to be 32 in a couple of days — and there’s still a lot of time. I’m still very patient and understanding in how the process works. I trust the process.”

It’s worth pointing out here that we introduced the specific word “satisfied” into the conversation, which Crews was quick to say would not be a word he’d use to describe his main-roster run, which has felt like a start-and-stop since Spring 2016.

Either way, that “process” Crew speaks of has taken the former NXT Championship contender to exactly this point, where he is booked to wrestle Andrade tonight in “SmackDown’s” opening “King of the Ring” round.

We asked Crews if he thinks “King of the Ring” being on WWE’s weekly episodic basic-cable shows — as opposed to on pay-per-view, where the bracket challenge existed for most of the 1990s and a few years in the early 2000s, with one revival for 2015 — “diminishes” the tournament. Again, a word we put out there.

“No, I don’t think anything’s diminished at all,” Crews responded. “First of all, the talent that we have, in my opinion, I think it’s the greatest roster of all time as far as talent goes.”

“There’s so much potential for these amazing matches with the talent that is matched up in the tournament, and I’m excited to be a part of it. Growing up watching ‘King of the Ring,’ I never thought I was gonna actually be in ‘King of the Ring,'” Crews continued. “It’s a great opportunity for me, personally, because I feel like winning this tournament could help me get my career to the next level. Instead of being stuck in the same place, it’ll help me break past that plateau and get that kick-start to possibly skyrocket my career. I’m sure that’s how most of us are looking at it.”

Catch Crews taking his first step towards that goal tonight on USA Network’s “SmackDown Live,” when he’ll face off with Andrade. “SmackDown,” which will shift to Fridays on Fox this fall, starts at 8/7c. The new “King of the Ring” setup started Monday on “Raw.”