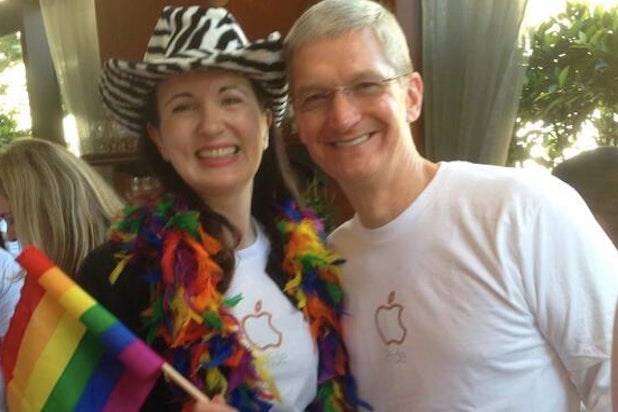 Days after a CNBC anchor was accused of outing him on the air, Apple CEO Tim Cook made a surprise appearance at the San Francisco Pride Festival, posing with Apple employees and tweeting his support of the parade.

Cook wore an Apple Pride t-shirt and appeared in photos during the festivities. While Cook did not march in the parade, he tweeted his support of the proceedings.

Also read: CNBC Anchor Accused of Outing Apple CEO, But Did He? (Video)

Though Cook was named the most powerful LGBT person on Out’s 2013 power list, he has never confirmed or denied he is gay, nor spoken about any aspect of his personal life.

So when “Squawk on the Street” co-anchor Simon Hobbs said Friday that he believed “Tim Cook is fairly open about the fact he’s gay,” he was met with an icy response from his studio audience. New York Times columnist James R. Stewart, who was heading a panel discussion on the show, said he didn’t want “to out anybody.”

But the moment raised an interesting discussion about what it means to be out in 2014: Does coming out require a public announcement? Simply living your life as out? Or not commenting one way or another?

Out or not, Cook is a staunch proponent of LGBT equality.

“Apple believes equality and diversity make us stronger, and we’re proud to support our employees and their friends and families in this weekend’s celebration,” Apple spokeswoman Michaela Wilkinson said in a statement.