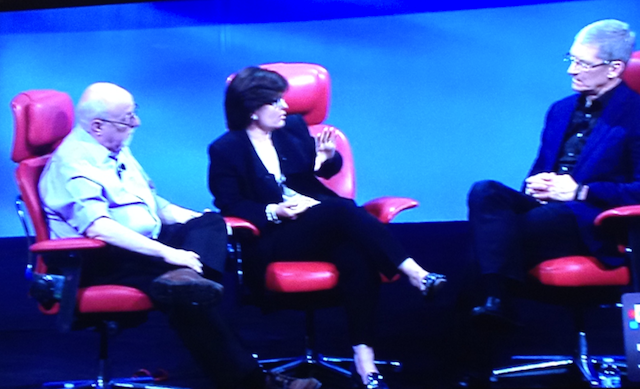 The CEO of one of the most successful companies on the planet, Tim Cook of Apple, on Tuesday backed away from promising dramatic change in the television viewing experience, but promised that “there are several more game-changers in us.”

Cook appeared at the AllThingsDigital conference in Southern California, where he was grilled by journalists Kara Swisher and Walt Mossberg on a stage where his former boss, Steve Jobs, had often appeared.

He talked about the future of the company, his leadership style and the vision for Apple products in the wake of Jobs’ death in 2011. The gap between the charismatic co-founder of Apple and that of his low-key successor was striking.

“What is your grand vision?” Swisher challenged Cook, who assured her: “There is a very grand vision.”

“In a way you’re like a movie studio – people expect hits that will enthrall the audience,” said Mossberg. “It’s been a while. Are you still that company?”

“Yes, we’re still that company,” responded Cook. “We have some incredible plans we’ve been working on for a while.”

But the CEO declined to offer any details on new Apple products, which under Jobs' leadership transformed the American cultural landscape. Cook was pressed hard on a long-awaited product around the television experience, and suggested that a revolutionary product was not close to fruition.

Swisher asked if Hollywood studios were holding up Apple's product.

"I don’t want to go into detail," said Cook, noting that the company's focus was on Apple TV, a device that marries the Internet to the TV set. "It continues to be an area of great interest to us."

Mossberg insisted: "Do you have an Apple take on TV? It’s underway?" Cook: " I have nothing to announce. But it’s an area of incredible interest."

Mossberg also pressed Cook hard on whether Apple was innovating fast enough, noting the growth of Google-made Android phones, and whether the iPhone should adopt the larger screens of competitor phones.

The company remains one of the wealthiest companies on the planet. But its stock has dropped dramatically over the past year, from a high of $700 a share last October to a close at $441 on Tuesday.