Ah, September. The start of a new school year, the buying of new clothes, the premiere of new TV shows, and Apple’s presentation of the latest iteration of the iPhone — in this case, the iPhone 7. CEO Tim Cook unveiled the iPhone 7 and iPhone 7 Plus at Apple’s semi-annual keynote event on Wednesday afternoon.

The new iPhones are available for pre-order on Sept. 9, and will ship starting Sept. 16.

The hubbub this go-round? No headphone jack, meaning new Apple earbuds that plug into the lightning port on the new iPhone 7 and iPhone 7 Plus. Those come with the phone. Or, you can purchase Apple AirPods, wireless earbuds that, for $159, do all manner of nifty things.

Apple also announced a new version of the Apple Watch, geared at fitness buffs (or those who’d like to be fitness buffs).

Apple is fighting a bit of an uphill battle when it comes to the iPhone. A consumer survey from firm Branding Brand on Aug. 30 found a nearly even split among respondents as to who plans on trading in their current iPhone for an iPhone 7 — 49 percent said no, and 51 percent said yes. And only 12 percent of those survey-takers cared about the lack of a headphone jack.

Research firm eMarketer estimates 90.1 million Americans own an iPhone already, and while that’s 43.5 percent of the smart phones in the U.S., competitor Samsung shipped 77 million smartphones worldwide, while Apple shipped 40.4 million. (Samsung just ran into some smartphone troubles of its own, thanks to exploding batteries in its new Note 7 phone.)

Increased competition has led to slowing iPhone sales, in turn leading to lower Apple revenue last quarter. Will wireless earbuds and some other tweaks be enough to convince non-die-hard Apple fans to trade up?

Follow along with our live blog of the keynote below:

10 a.m. PT: We start out with a special edition of “Carpool Karaoke” with CEO Tim Cook joining “Late Late Show” host James Corden. Mmmm, syngergy: Apple Music will be the exclusive home for a “Carpool Caraoke” show, starting next year.

10:04 PT: Tim Cook takes the stage, cracking wise about how those featured on Apple Music’s “Carpool Karaoke” will have better singing voices than he does. Apple Music, he reveals, now has 17 million subscribers.

10:07 PT: Mario is coming to iOS! Nintendo has created a Super Mario game just for Apple’s App Store, “Super Mario Run.” Father of Nintendo Shiguro Miyamoto is on hand to introduce and give the audience a tutorial. Mario runs on his own, which is fun, and means you can play one-handed. (Make your own awful jokes here.)

10:19 PT: Cook is talking about education and the importance of giving kids the opportunity to learn to code. It’s nice that Apple wants to teach kids to code, but probably not what you’re reading this for.

10:21 PT: iWork now has real-time collaboration, which Google has had for a while now.

10:25 PT: Ah, time for the introduction of the Apple Watch 2. Cook explains that Apple Watch is now the second-biggest watch brand in the world by revenue, which is what happens when you charge $350 a pop. With the new Apple Watch, you can dial 911 with the touch of a button, which will also send a message to your emergency contact.

10:29 PT: Here we go: Pokémon Go is coming to your Apple Watch, meaning you no longer have to travel with a battery pack to snag that elusive Articuno. Niantic’s John Hanke says Pokémon hunters have clocked 4.6 billion (did we hear that right?!) kilometers playing .

10:35 PT: You can now go swimming with your Apple Watch! …If you buy the new one, called Apple Watch Series 2. It’s very technologically advanced — see, in order to be waterproof, the speakers had to be totally re-engineered to — hey, where are you going? It’s impressive!

10:45 PT: You can get the Apple Watch 2 in ceramic, which a lot of people in the crowd applaud, as though it means something. Apple is partnering with Hermès for new colors and straps, to cater to the Man or Woman who really wants an Hermès Apple Watch in his or her life.

10:49 PT: “Starting a run has never been easier” with Nike Plus on Apple Watch, according to Apple. Indeed, we’ve heard of people literally just picking a foot up off the floor and managing it.

10:54 PT: Nearly an hour in, we’re finally getting to the iPhone 7, which Tim Cook calls “the industry standard.” Apparently Apple Maps is supposed to not be terrible now, and you can use other apps within Apple Maps to, say, book a reservation at a restaurant. The new version of iMessage will allow you to make full-screen effects happen.

10:59 PT: The iPhone 7 will be made of aluminum (“aluminium,” as Jony Ive describes it) and glass, and appears to have two cameras. “It starts with a new finish we call ‘jet black,'” as though “jet black” were not a color that has been in use for most of human history. It will come in regular black, rose gold, regular gold, and silver, too. The real fun here is that it’s waterproof (up to a certain point).

11:06 PT: We’re talking now about technical stats for the iPhone 7’s camera. Not being photography nerds, let’s just say “It will probably take pretty good pictures unless you are the writer of this live blog.” The iPhone 7 Plus will have two cameras on the back — one wide-angle, and another telephoto, optimal for people who are using their phones to shoot professionally. The dual-camera system of the iPhone 7 Plus will allow you to show off your friends’ pores, which is neat!

11:21 PT: Instead of bringing up someone from Snapchat, the Hot New Kid, Apple brings Instagram’s head of design, Ian Spalter, up to talk more about the camera and using live photos (halfway to what the wizards of “Harry Potter” have in their world) for Instagram.

11:25 PT: Uh-oh, we’re on to sound. Yes, the iPhone 7 will have stereo speakers that are twice as loud. But we’re moving from standard headphone jacks to the lightning port.

So, yeah: No more headphone jack for iPhones. Included with every iPhone 7 will be a pair of earbuds that connect with the lightning adapter. Apple will be including an adapter for standard headphones, though.

11:29 PT: Continuing to explain the rationale behind getting rid of the traditional headphone jack: Apple AirPods, which are basically smart cordless earbuds. They last five hours on a single charge, and you can connect them to all Apple devices, allowing you to switch to any device you want instantly. 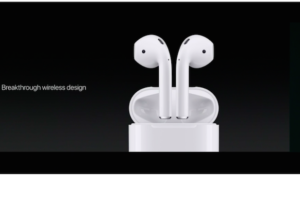 11:33 PT: Beats is going to use the same chip the AirPods use for a new special pair of wireless headphones, with 40 hours of battery life.

11:35 PT: ‘Kay no more iPhone stuff, on to Apple Pay. They’re rolling it out in Japan, in addition to Apple Maps with Transit. Enjoy, Japan.

11:37 PT: Performance! Graphics! Dual-core! Chips! All sorts of tech stuff that, frankly, most of you don’t care about, just as long as you can play Super Mario Runs on your phone. 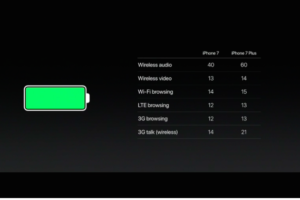 And what will all this high tech cost you? $649 to start, for the regular iPhone 7. And in order to allow you some more room for all those incredibly large photo and video files you’ll have, the iPhone 7 and iPhone 7 Plus will come with 32GB, 128GB or 256GB of storage.

12:02 PT: And that concludes our event. Thanks for joining!