Apple unveiled its latest slate of new products on Monday in Brooklyn — just in time for millions of loyal customers to shell out their money before the holidays — including the newest iPad and a long-awaited Mac Mini update. Oh yeah, Lana Del Rey also made an appearance, because why not?

The new Mac Mini strikes a familiar look on the outside, but its support for up to 64 GB of RAM and quad-core and six-core Intel processors instantly separate it from the most recent update, launched in 2014.

The Mac Mini will have up to 2 TB of storage and sport Apple’s new T2 security chip. It has four Thunderbolt 3 ports, and an HDMI and USB-A port. The 8 GB base model starts at $799 and will start shipping November 7 — but if you get it completely tricked out, you’re looking at upwards of $4,000.

The MacBook Air also received an update, with a 13.3 inch Retina display, touch ID and Siri now built in. It comes with an eighth-generation Intel dual-core processor and up to 16 GB of RAM and 1.5 TB of storage. The 2018 Air is a little bit more air-like, too, shedding about a quarter of a pound to hit 2.75 pounds. It still has a headphone jack and two USB port on the sides. The MacBook Air is made with 100 percent recycled aluminum, just like the new Mac Mini. It’ll run $1,199 for its 8 GB base edition and will also ship November 7. 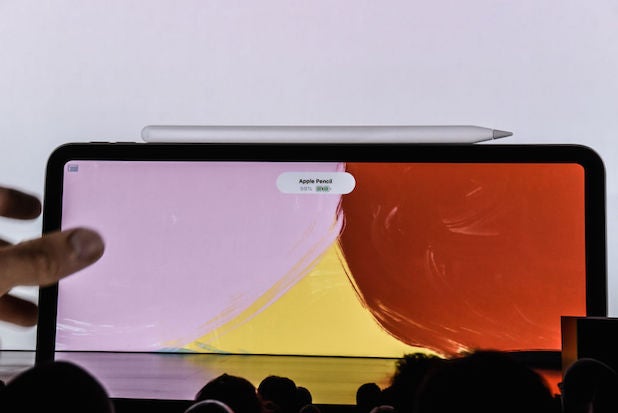 The third major product release was the new iPad Pro, which, like the latest iPhones, has kicked the home button to the curb. The new iPad runs on Apple’s A12X bionic chip and comes with up to 1 TB of storage. It comes with a wider 11 inch screen, but by slimming down the bezel, fits the same body size as the old 10.5 inch iPad. A bigger 12.9 inch version will also be available.

Apple boasted the latest iPad is 92 percent faster than all portable computers sold in the last year. The 7 megapixel camera on the front will use FaceID to unlock, and the back has a 12 megapixel camera. The 11 inch base model will run $799, and the 12.9 inch will cost $999. It will also start shipping November 7.

A few other things worth mentioning: Tim Cook kicked things off by saying there are now 100 million active Mac devices around the world. And if you stayed until the end, you caught a performance by Lana Del Rey. With $240 billion in cash, Apple can afford to splurge a bit.