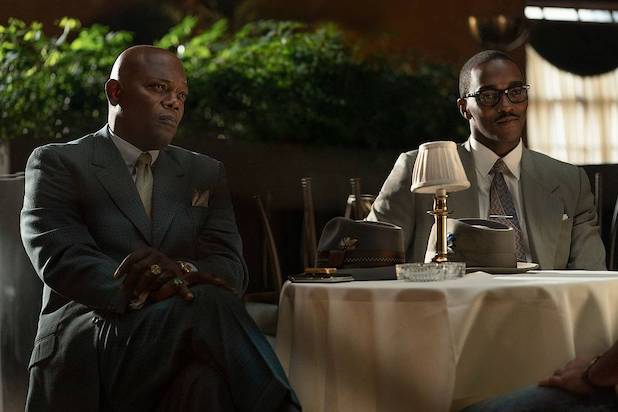 Apple has cancelled the planned premiere of its film “The Banker” as the closing night film of the AFI Fest this Thursday over new “concerns” the company now has regarding the film.

“We purchased ‘The Banker’ earlier this year as we were moved by the film’s entertaining and educational story about social change and financial literacy,” an Apple representative told TheWrap in a statement. “Last week some concerns surrounding the film were brought to our attention. We, along with the filmmakers, need some time to look into these matters and determine the best next steps. In light of this, we are no longer premiering ‘The Banker’ at AFI Fest.”

The drama starring Anthony Mackie and Samuel L. Jackson is based on the true story of two real estate investors and businessmen, Bernard Garrett (Mackie) and Joe Morris (Jackson), who managed to buy banks and homes in all-white neighborhoods and loan it back to black people looking to find their own American dream in a still segregated world that made that dream difficult. Nicholas Hoult co-stars in the film as the white man the duo hired to be their stand-in for business deals with white bankers.

The closing night gala on Thursday will now be a screening of “Marriage Story.”

“We support Apple’s decision to postpone the premiere of ‘The Banker.’ Fortunately our partners at Netflix have generously allowed us to screen their critically acclaimed ‘Marriage Story’ to close out AFI Fest at the TCL Chines Theatre,” an AFI Fest spokesperson said in a statement.

“The Banker” is one of three original films Apple dated for theatrical release among its acquisitions for its new Apple TV+ streaming service, the others being the teen drama “Hala” and the nature documentary “The Elephant Queen.” “The Banker” was meant to debut in theaters on Dec. 6 followed by a 2020 debut on Apple TV+, but as of yet its theatrical release nor its debut date have been put on hold by Apple.