Apple TV+ is finally here and it might be the perfect streaming service for those afraid of commitment — at least for now. Apple confirmed to TheWrap on Friday that two episodes of each Apple TV+ series are available for free to those using the Apple TV app. So you can watch Episodes 1 and 2 of each of Apple’s original shows before you are asked to sign up for the platform’s 7-day free trial — as long as you use the Apple TV app.

There’s no word yet on how long this promotion, which was not revealed ahead of the streaming service’s launch, will last.

As you can see in the screengrabs below, a user is given the ability to play the first and second episode of Jennifer Aniston and Reese Witherspoon’s “Morning Show,” but when you arrive at the third, you’ll be asked to “Try Apple TV+” and if you choose to do so, then a pop-up will ask you to initiate your week-long free trial. 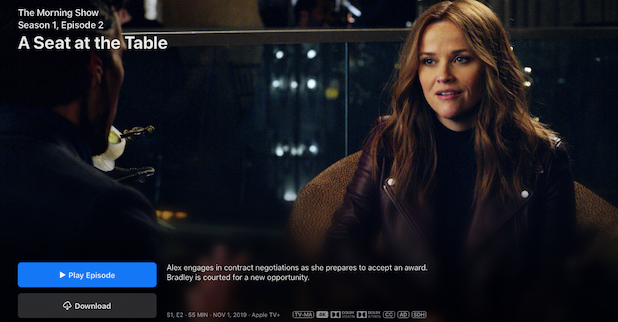 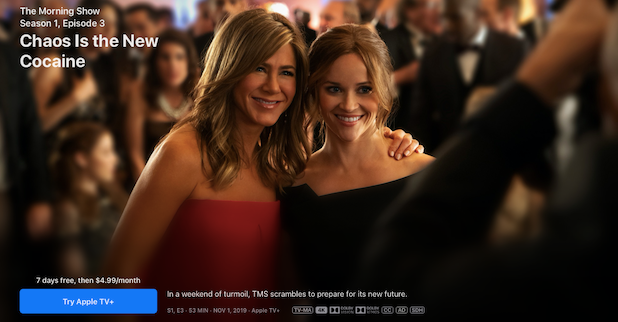 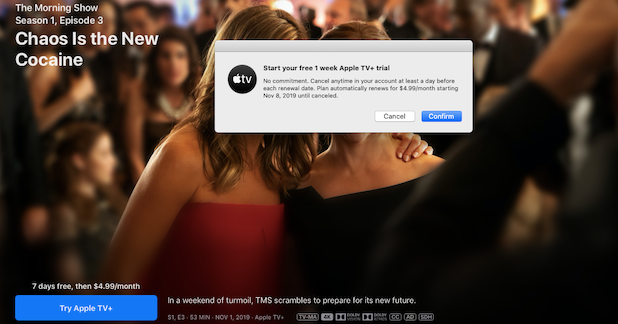 This is true not just for “Morning Show,” but for all of the new Apple TV+ series: the mythology-heavy drama “See,” starring “Game of Thrones” alum Jason Momoa; the winking, anachronistic period biopic “Dickinson,” starring Hailee Steinfeld; the stately alternate-history drama “For All Mankind,” which wonders what would’ve happened if the Soviets beat the U.S. to the moon; Sesame Workshop show “Helpsters”; new Peanuts cartoon “Snoopy in Space”; and the “Ghostwriter” reboot.

(Note: All Apple TV+ series launched with their first three episodes, except “Dickinson,” which dropped its entire 10-episode first season at once. The rest of the shows will continue to roll out new episodes weekly.)

The only two launch titles that the pair-of-free-episode feature doesn’t apply to are “The Elephant Queen,” which is a documentary feature, and “Oprah’s Book Club,” which only has one installment available right now and will offer another every two months.

TheWrap has confirmed you need to use the Apple TV app itself to view the free episodes because if you try to stream them via the website, you’re going to have to sign up for that free trial right off the bat before you can begin viewing Apple TV+ content.

Once you finish watching the first two episodes of each new series for free and exhaust your free 7-day trial, Apple TV+ will cost you $4.99 per month. However, the service will be free for one year when you buy a new iPhone, iPad, Apple TV, Mac or iPod Touch.