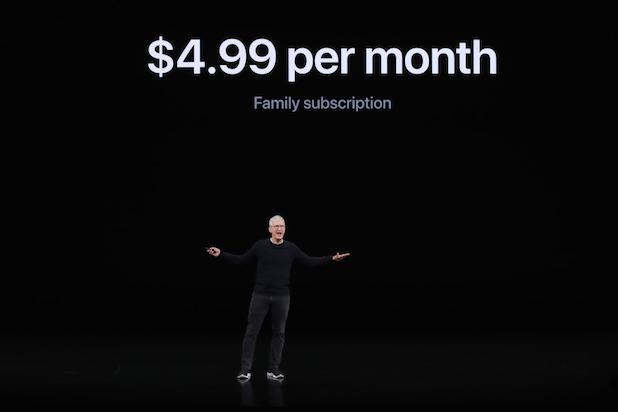 Apple chief Tim Cook, holding court Monday morning at the tech giant’s annual product launch event, officially revealed Apple TV+ will come out on Nov. 1 — or about two weeks before Disney launches its own streaming service, for those keeping track.

The service will be “crazy,” Cook raved, with one movie and eight shows available at launch, including “For All Mankind,” an alternate-universe look at if the Soviet Union beat the U.S. to the moon, and “The Morning Show,” a look at the behind-the-scenes drama of TV morning shows starring Reese Witherspoon, Jennifer Aniston and Steve Carell. Most shows will have three episodes available to watch right away, with more episodes releasing on a weekly basis afterwards.

What most Apple fanboys in the crowd seemed to find “crazy,” though, was its $4.99 monthly price. That drew a hearty round of applause from the crowd inside the Steve Jobs Theater in Cupertino, California. And for anyone that buys a new Apple iPhone, TV, iPad, Mac, or iPod, they’ll get a year of the service for free.

Also Read: How Apple TV+ Will Roll Out Its Series

That price point comes in well below other major streamers. Netflix, the industry’s leading service with more than 150 million global subscribers, costs $12.99 for its standard plan, its most popular package offering HD streaming on two devices at the same time; its cheapest package runs $8.99 and its most expensive plan costs $15.99 per month.

Amazon Prime Video comes as a standalone service for $8.99 per month — or viewers can get it as part of their $120 annual Prime membership.

Here’s a look at several other services that cost as much or more than Apple TV+:

That $4.99 price may also reflect Apple’s understanding it will launch with markedly less titles than Disney+ and other established services.

“[The] price point is very sensible – Apple is moving into an extremely crowded market, with an untested content offer,” Ampere Analysis analyst Richard Broughton said.  “A low entry price, undercutting other ‘premium’ OTT services, is a sensible move to drive early traction from users not thinking of upgrading devices in the near future (and people outside the Apple stable).”