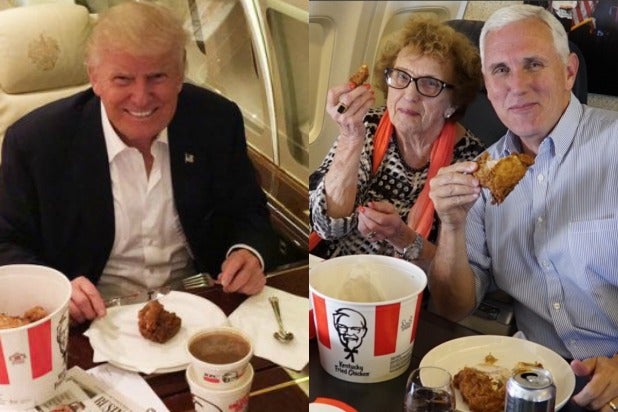 Why have Donald Trump and Mike Pence been tweeting pictures of themselves eating KFC on planes?

It could be that they just really, really like their chicken — it is finger lickin’ good, after all.

But there’s also a theory that the pictures are a sexist dig at Hillary Clinton that can only be understood by those who read between the lines.

We Googled, and here’s what she’s referring to. Last month, buttons comparing Hillary Clinton to a “KFC special” made headlines after a San Francisco Chronicle reporter snapped a picture of them at the California Republican Party Convention and posted the image on Twitter.  The buttons declared: “KFC Hillary Special: 2 fat thighs, 2 small breasts… left wing.”

State party officials said they were unaware of the buttons and thanked the reporter, Carla Marinucci, for “bringing the matter to our attention.” The California Republican Party communications director insisted the buttons had been “removed,” adding that “the vendor had brought only 5 of the buttons to convention, none of which had been sold.”

Coincidence? Maybe… But anyone who really loves their KFC will tell ya, eating it with a fork and knife is a big no-no.

The Trump campaign shockingly did not respond to TheWrap’s request for comment.