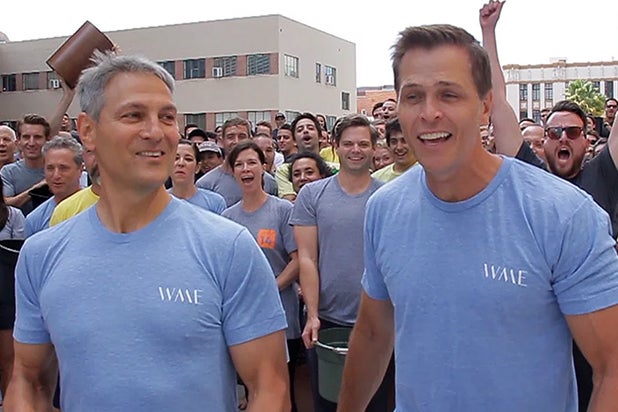 After being challenged to philanthropic action by their client Hugh Jackman, along with the cast of the upcoming film “Pan,” CEOs Patrick Whitesell and Ari Emanuel led the talent agency’s employees outside and proceeded to get wet.

As per the rules of the challenge, Whitesell and Emanuel nominated three other CEOs to follow in their soaking-wet footsteps: CBS Corp. CEO Les Moonves, Live Nation CEO Michael Rapin and Warner Bros. CEO Kevin Tsujihara. The video, which you can see here, gave them 24 hours to either take the freezing-cold plunge themselves or make a donation to combat ALS.

As TheWrap previously reported, the popularity of these challenges has helped raise both millions of dollars in charitable donations and also awareness to help fight Amyotrophic Lateral Sclerosis, commonly known as Lou Gehrig’s Disease.

“We have never seen anything like this in the history of the disease,” said Barbara Newhouse, president and chief executive of the ALS Association. “We couldn’t be more thrilled with the level of compassion, generosity and sense of humor that people are exhibiting as they take part in this impactful viral initiative.”