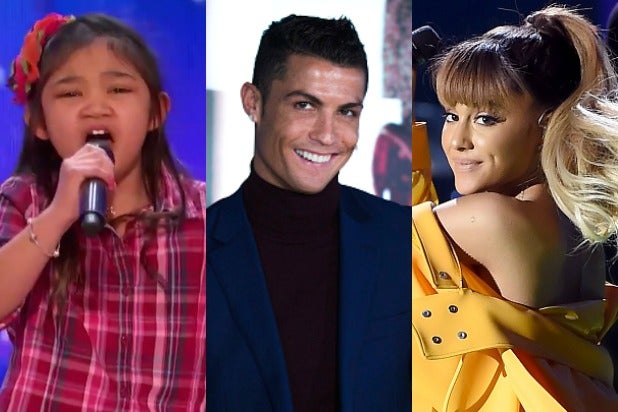 The Wrap has partnered with Canvs, the emotion analytics company, for a weekly look at some of the characters and personalities that have TV viewers the most worked up on social media. The data below covers May 31 through June 6 and is drawn from the most emotionally reacted-to television shows, including broadcast, cable, streaming and PPV.

Haha Ronaldo is a beast ⚽️⚽️⚽️

Ronaldo is on fire. ????#RealMadrid

Also Read: World Cup: Cristiano Ronaldo Breaks U.S. Hearts With One Goal, Lifts Them With Another

Goal is Ronaldo's 600th (for club and country). Congratulations

Ronaldo with another incredible performance and another trophy ????

Canvs is still processing the total ER count surrounding the One Love Manchester concert — the simulcast across multiple networks plus the continuing views of the archived livestream means the reactions to the show are still rolling in — but it’s clear that Ariana Grande, who organized and headlined the benefit concert, has been a dominant force in broadcast-related ERs over the period measured. There was an outpouring of love for the singer throughout the show, with fans expressing appreciation for her performance and applauding her positive attitude in light of the tragic Manchester attack.

Also Read: Ariana Grande Ends 'One Love Manchester' With 'Somewhere Over The Rainbow'

THE TEARS IN MY EYES ARIANA IS CRYING MY LOVE #OneLoveManchester

ARIANA IS PERFORMING WITH THE BLACK EYED PEAS OMG #OneLoveManchester

I love Ariana so much for doing this. ❤️ #OneLoveManchester

NBC’s “America’s Got Talent” is back, and viewers were glued to the screen for the second auditions episode, which received 22,868 ERs. During the show, 9-year-old Angelica Hale gave people goosebumps with her rendition of “Rise Up” by Andra Day. The performance earned her a standing ovation and four yeses from the judges — and thousands of messages of congrats, love and wonder from those watching at home.

Angelica Can not only sing she can SANG# YESS GET IT. #AGT

In case you missed it, here’s Hale’s powerful performance:

You're going to have goosebumps when you hear @angelicahale sing “Rise Up” by @AndraDayMusic. #AGT pic.twitter.com/aRYOj4iuZA