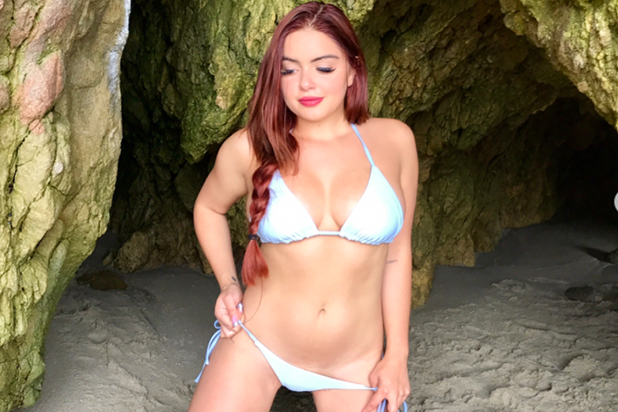 “Modern Family” actress Ariel Winter tried to make a point about short skirts on Thursday, and found herself on the receiving end of a lot of short tempers instead.

Winter, who seems to receive almost as much attention for her wardrobe choices as for her acting skills these days, hit up Twitter and Instagram to share a message about how the length of a woman’s skirt doesn’t reflect on her sexual willingness.

The message came in the form of a drawing featuring a woman in a revealing skirt, with text that partiially read, “Skirt length does not correlate to how  sexually available that person is regardless of how society teaches that we should be ashamed of our bodies.”

While many commenters applauded the actress for the inspiration, others were quick to hurl criticism at Winter, who appears to have become something of a social-media anger magnet of late.

“Ima wear a fake cop outfit and see how many people ask me for some police help. You want respect, dress respectfully,” snarked a commenter on Winter’s Instagram account.

“I don’t think it’s about respecting your body as much as being classy… Dont Mic it up,” another offered.

“If you show your tits all day dont be bothered by people looking,” wrote yet another detractor.

“You also only get one first impression, and you can’t control how people perceive your ‘empowerment,'” read another bit of advice.

“Yeah. But does your vag have to hang out?” another commenter wondered.

“The thing you’re failing to understand is that it’s more than just about YOU dear! When you’re in the platform that you’re on, it’s no longer about you,” counseled another concerned onlooker. “You have millions of people who look up to you and see you as a role model….many of them being young girls. So it’s all about how you want people yo look up to you and about the example you set for younger girls and women and to be honest….the example you’re setting so far is not that good. I know if I had a daughter I wouldn’t want her looking up to you.”

“So desperate for attention. Narcissist culture,” one commenter lamented.

“Spoken like a true woman….who is young, naive, inexperienced and ignorant to modesty and class,” went another response.

And then there was the somewhat creepy, “I want your body to be mine too.”

TV star has grown up before our eyes

Ariel Winter is best known for her role as middle sister Alex Dunphy on ABC's long-running hit comedy series "Modern Family." The show is now in its eighth season, and when Winter started on it she was just a kid. Now, the actress is 19 years old and has become an icon of body positivity, despite recent criticism online. Scroll through to watch her evolution over the years.