Paul Provenza, director of the hit documentary "The Aristocrats," is laughing it up for Showtime with a new series called "Behind the Green Room Door."

Despite the vaguely porntastic title, the show will actually feature comics such as Eddie Izzard, Jonathan Winters, Larry Miller, Dana Gould, Roseanne Barr and Drew Carey riffing with one another in front of a small studio audience. Provenza will host; the series bows next year. 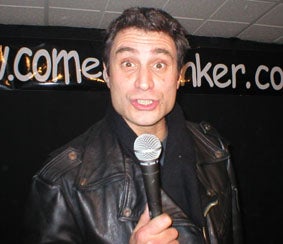 Showtime’s release follows, but one fun fact: Gould, a former writer on "The Simpsons," is married to HBO Entertainment chief Sue Naegle.

Listening in on a group of famous comedians privately riff with one another is usually just a comedy fan’s wildest fantasy but viewers will experience this rare event in a new six-episode, half-hour comedy series tentatively titled BEHIND THE GREEN ROOM DOOR slated to premiere in 2010, it was announced today by Robert Greenblatt, President of Entertainment, Showtime Networks Inc.

Hosted by comedian Paul Provenza, the director and co-producer of the behind-the-scenes comedy documentary “The Aristocrats,” BEHIND THE GREEN ROOM DOOR offers viewers an opportunity of a lifetime to witness the hilarious exchanges between comic legends who span several generations and for some, are meeting their own comedy idols for the first time.

“The Green Room is a ‘safe space’ for comedy, and a dangerous place for convention," says Provenza. “If you’re not easily offended and can roll with whatever happens when there are no rules, then being behind that door can be the time of your life.”

Each episode features a handful of the comedy geniuses mentioned above in a spontaneous, uncensored format. They share personal anecdotes, intimate thoughts and spur-of-the-moment, no-holds-barred comedy that — until now– only happens when comedians get together in private.

Filmed in front of an intimate live audience, they create comedy out of thin air as they tackle a wide variety of hot topics ranging from the state of comedy today to politics to racism to personal life lessons — all with the fearless honesty and lightning-quick, outrageous humor that takes place when there’s no one else around and the rules don’t apply.

BEHIND THE GREEN ROOM DOOR is executive produced by Paul Provenza and Barbara Romen.