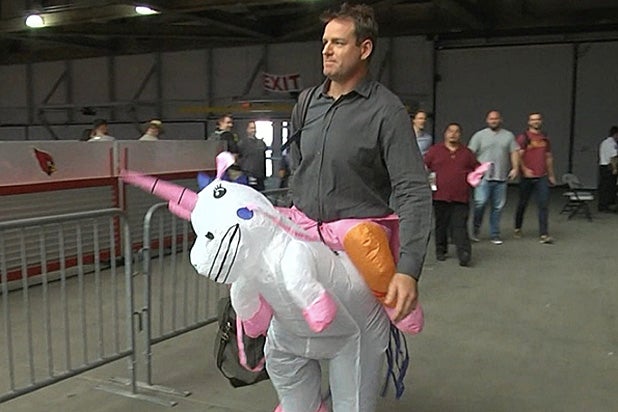 Amid all the serious coverage of the NFL with backlash against President Trump’s negative comments about players, Arizona Cardinals quarterback Carson Palmer added a little fun back to the game.

Yep, that’s a 37-year-old married father of two and pro football player attached to a pink and white fantastical creature, as captured by NFL on ESPN’s Twitter.

Carson Palmer arriving to MNF like he lost his fantasy football league ???? pic.twitter.com/jEJb6WSluJ

No, Carson isn’t having a moment of madness after the president called players who protest the anthem “sons of b—-h.” He actually lost the Cardinals’ weekly bucket challenge, in which the loser of the throwing competition must dress up in the costume of the winner’s choice, arriving at the stadium and warming up on the field with it on, or traveling on the team flight with it for road games, according to Cards Wire.

When it is Monday Night AND the home opener, you have to arrive in style. pic.twitter.com/yUE14CSSbk

ESPN broke with tradition Monday night to air the anthem performance ahead of their coverage of the game following protests from multiple teams on Sunday.