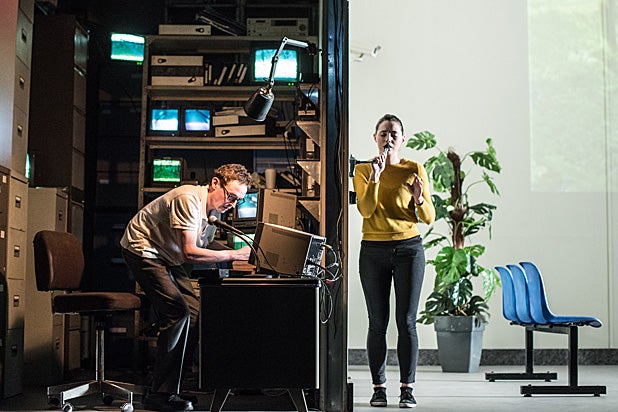 There’s a fine line between purposefully obscure and totally incomprehensible. Last season’s great musical “Lazarus” achieved the latter to remarkable effect in its presentation of a two-hour nightmare that was as scary and indecipherable as a surrealist masterpiece by Ernst or Tanguy. When you couldn’t follow the musical’s book by Enda Walsh, there were David Bowie songs, Ivo van Hove’s direction, and Jan Versweyveld’s scenic design to sweep you up and carry you along.

Walsh returns this season without those collaborators for his new play, “Arlington,” which opened Wednesday at St. Ann’s Warehouse in New York City.

It’s another very bad dream, only this time it’s a dystopian future and the characters are living it. In the opening scene, Walsh withholds so much information – the time, the place, the relationship of the imprisoned Isla (Charlie Murphy) and her interrogator (Hugh O’Conor) — that chronic disorientation is the immediate and arguably appropriate response to “Arlington.”

Most fascinating is that Isla and the Young Man appear to have switched roles. Even though she’s locked up and under surveillance in what appears to be a huge waiting room, Isla knows what she’s doing there and it is her interrogator who’s nervous. After all, it’s his first day on the job, and she often has to explain the rules to him.

Isla’s routine in this big room is to tell stories, which the Young Man records. The stories could be memories, they could be entirely made up. What also becomes apparent during the course of these conversations is that at a certain point, the enterprise that employs the Young Man will have gathered enough stories from Isla and her time will be up.

That’s the first scene of the 90-minute “Arlington.”  The second scene features a Young Woman (Oona Doherty), who looks very much like Isla and performs a ballet by choreographer Emma Martin that has the dancer spinning and running around the room. Doherty also executes a slo-mo sequence that defies gravity, and ends the scene with a most spectacular leap.

In the third scene, the Young Man reappears to take Isla’s place in the room. He’s now bloodied, and his interrogator is a disembodied voice that apparently belongs to the static video image of an older woman. Is she Big Mother? Or is she Big Sister?

The story of “Arlington” becomes clear, not because of Walsh’s powers as a storyteller. It’s that he borrows so much from other sources. Why are Isla’s memories/stories being recorded? Is “Arlington” a prequel to “Blade Runner”? Will her stories of a sylvan world be implanted in robots or yet-to-be-born persons? Press materials make the obvious connection to George Orwell’s “1984” with its government surveillance and perpetual war. Walsh tweaks those themes by suggesting that all the wars couldn’t stop the population explosion, making it necessary for some kind of mass extermination of the “lower ones,” who’ve been rounded up, like Isla, and put in towers. This cityscape brings to mind Doris Lessing’s “Mara and Dann,” the only difference being that Walsh’s towers are new.

The playwright wants to be terribly pessimistic, but you might take hope in that these high-rise buildings are obviously some part of an infrastructure program that didn’t die in Congress. And there are other unexpected signs of encouragement. Jamie Vartan’s scenic design presents an immense, immaculate room that would house at least a dozen New Yorkers. Walsh directs. Perhaps another director may have conjured up a less auspicious future.

“Arlington” comes from the Galway International Arts Festival, where it had its world premiere in 2016. The timing of its American premiere is not as good. Annie Baker’s “The Antipodes” just opened and continues to run at the Signature Theatre here in New York City. Baker and Walsh are intrigued with the power of storytelling, and exploring when reality becomes fiction and vice versus. Baker’s play is a comedy but darker than Walsh’s drama in that her characters’ collective nightmare is telling stories for profit in what may or may not end up being a video game or whatever the kids are watching nowadays. Baker does Walsh one better and gives us two Big Brothers: One’s a disembodied, often discombobulated voice on Skype coming to his employees from god only knows where. The other is an absentee boss (Will Patton being kookier than ever) who praises his storytellers into early unemployment. Stories are a symbol of our humanity, but when told simply for profit or political control, they can have a brutal effect on the soul.