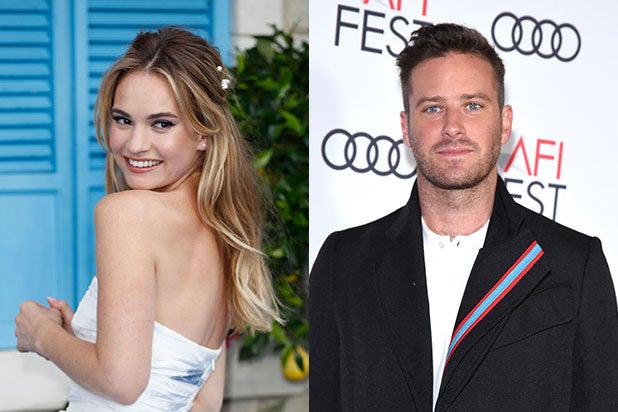 “Rebecca” tells the story of a newly-married young woman who, on arriving at her husband’s imposing family estate on a bleak English coast, finds herself battling the shadow of his dead first wife, the mysterious titular character, whose legacy continues to haunt the house.

Du Maurier’s work has been adapted for the big screen several times, most-notably when Alfred Hitchcock won the 1940 Best Picture Oscar for his version, which starred Sir Laurence Olivier and Joan Fontaine.

James starred earlier this year in “Mamma Mia! Here We Go Again,” which earned $393.4 million worldwide at the box office. She also starred opposite Ansel Elgort in  “Baby Driver” and in the Academy Award-winning “Darkest Hour.” James will soon be seen in the untitled Danny Boyle film for Universal Pictures.

Hammer has worked with Wheatley before in the action-comedy “Free Fire.” Earlier this year, he starred in Boots Riley’s “Sorry to Bother You.” Hammer will next be seen opposite Felicity Jones in Mimi Leder’s “On The Basis of Sex,” and then Anthony Maras’ “Hotel Mumbai” with Dev Patel and an untitled project from Babak Anvari.

Also Read: Armie Hammer 'Handed at Least a Peach or 2' Every Night From 'Call Me By Your Name' Fans (Video)

The film will be produced with Working Title, which has made more than 100 films that have grossed more than $7.5 billion worldwide to date and won 14 Academy Awards and 40 BAFTA Awards.

Eric Fellner will produce for Working Title, along with producers Tim Bevan and Nira Park.