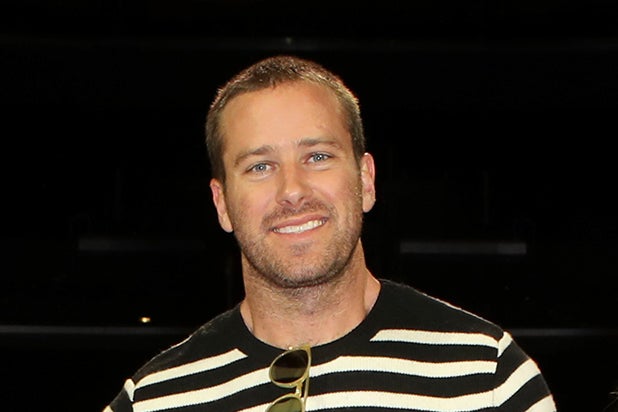 Armie Hammer is the named suspect in an alleged sexual assault investigation, the Los Angeles Police Department confirmed to TheWrap.

The LAPD added that the investigation began on February 3. The news comes after the actor was on Thursday accused of rape and assault by a woman named Effie connected to an incident in Los Angeles from April 2017, accusations which the actor has denied.

No other details were provided by the LAPD.

A woman on Thursday accused Armie Hammer of violently raping and assaulting her during an encounter in Los Angeles in April 2017. In a press conference with her attorney Gloria Allred, the woman — identified only as Effie — said that Hammer “violently raped” her for a period of over four hours, repeatedly banged her head against a wall and committed other “violent acts” to which she said she did not consent, including beating her feet with a crop.

Allred said her client has been cooperating with law enforcement but does not plan to file a civil lawsuit.

Also Read: Armie Hammer Accused of Rape and Banging a Woman's Head Against a Wall in 2017

Hammer’s attorney disputed the claims of the accuser, identifying her as Effie Angelova: “From day one, Mr. Hammer has maintained that all of his interactions with Ms. Angelova — and every other sexual partner of his for that matter — have been completely consensual, discussed and agreed upon in advance, and mutually participatory.”

According to Hammer’s attorney, Andrew Brettler, the accuser’s “own correspondence with Mr. Hammer undermines and refutes her outrageous allegations. As recently as July 18, 2020, Ms. Angelova sent graphic texts to Mr. Hammer telling him what she wanted him to do to her. Mr. Hammer responded making it clear that he did not want to maintain that type of relationship with her.”

The woman, now 24 and living in Europe, said she met Hammer over Facebook in 2016 when she was 20 and had an on-again, off-again relationship with the married actor between 2016 and 2020. Effie, who according to Vanity Fair first detailed accusations against Hammer in a series of posts on the House of Effie Instagram account, said their last correspondence was in 2020. (Allred would not comment on whether her client was behind the House of Effie account.)

“It was never Mr. Hammer’s intention to embarrass or expose Ms. Angelova’s fetishes or kinky sexual desires, but she has now escalated this matter to another level by hiring a civil lawyer to host a public press conference. With the truth on his side, Mr. Hammer welcomes the opportunity to set the record straight,” Brettler continued in his statement. “Ms. Angelova’s attention seeking and ill-advised legal bid will only make it more difficult for real victims of sexual violence to get the justice they deserve.”

In response, Allred said, “I challenge Armie Hammer to present all, not some, of his communications with Effie to the Los Angeles Police Department and answer all of their questions directly rather than through his lawyers.”

Hammer, the Golden Globe-nominated star of “Call Me by Your Name,” has been in a career crisis since the House of Effie posts surfaced leaked messages that purported to detail his sex life, including an interest in cannibalism and rape fantasies.

Shortly after the leaked messages surfaced, Hammer dropped out of two upcoming projects: the Paramount+ series “The Offer” and the film “Shotgun Wedding,” in which he was set to star alongside Jennifer Lopez. Last month, the Hollywood agency WME also dropped him as a client.

In addition, two of the actor’s exes came forward individually to speak about their respective relationships with Hammer, with both women describing him as a violent and manipulative partner. Last July, Hammer announced his divorce from Elizabeth Chambers after 10 years of marriage; the couple share two children together.

Hammer released a statement shortly after he dropped out of Lionsgate’s “Shotgun Wedding” amid the firestorm, vehemently denying the accusations. “I’m not responding to these bulls– claims but in light of the vicious and spurious online attacks against me, I cannot in good conscience now leave my children for 4 months to shoot a film in the Dominican Republic. Lionsgate is supporting me in this and I’m grateful to them for that,” he previously said.