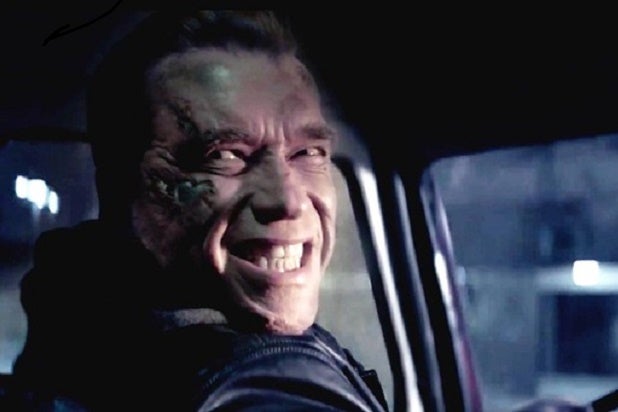 Arnold Schwarzenegger may never “be back,” as he famously vowed in the 1984’s “Terminator,” as a force at the domestic box office. His marquee muscle has atrophied, as evidenced by the lackluster $27.4 million debut of “Terminator Genisys” this weekend, the lowest of any film in the franchise since the original opened in 1984.

But overseas is a whole different story. The $150 million reboot of the iconic sci-fi series launched by James Cameron three decades ago powered to a strong $76 million from abroad this weekend and has grossed nearly $130 million globally as of Sunday. It opens in Germany, Japan and Spain next weekend, with China yet to come.

“Expectations always run high, and rightly so, for a franchise as long-lived and popular as ‘The Terminator,’ but this weekend the holdovers were so strong that in order for the film to have risen above ‘Jurassic’ and ‘Inside Out,’ it would have needed to be an across-the-board slam dunk with audiences and critics alike,” said Rentrak senior media analyst Paul Dergarabedian of the domestic numbers.

“The good news is that ‘Genisys’ will likely benefit from a strong international performance to bolster its bottom-line fortunes,” he said. “And with the extreme action-oriented nature of the film and Schwarzenegger’s presence in the film, audiences outside of North America could provide that boost.”

Gauging Schwarzenegger’s ongoing box office appeal is more than a parlor game for Paramount, which has two more sequels in the sci-fi franchise planned in 2017 and 2018. The reboot “Genisys” served, to a degree, as a test for the body-building champ and Paramount’s marketing strategy.

“I think there are things we can learn, and things that we needed to know,” said Megan Colligan, president of worldwide marketing and distribution at Paramount. One might be that while marketing a tentpole action film with a 67-year-old star might fly abroad, going in a different direction probably makes more sense for North American audiences.

There has been a clear pattern since Ahh-nuld, as his fans call him, returned to Hollywood after serving from 2003-2011 as California’s governor. His films do much better internationally than they domestically.

“The Expendables 2” marked Schwarzenegger’s return to the big screen in 2012. It made $85 million in North America, and $220 million abroad. “The Last Stand” followed ($12 million domestic, $36 million foreign), and “Escape Plan,” in which Sly Stallone co-starred, took in $25 million at home and $112 million overseas. Last year’s “Sabotage” bombed everywhere, but 2014’s “Expendables 3” rolled up $139 million from abroad and just $39 million in North America.

Several analysts felt Schwarzenegger would do better in a known franchise, and “Terminator Genisys” was certainly that, but he didn’t. Still Box Office.com editor Phil Contrino said he wouldn’t entirely count Schwarzenegger out.

“I think he could still be a viable draw in a comedy. This opening certainly doesn’t bode well for his potential when it comes to action films though,” he said.

“People love him,” she said. “He is an iconic actor in an iconic role. He’s in Japan now promoting the film, and he knows how to connect with people in just about every country. This was his biggest opening in Russia ever.”

Even if Schwarzenegger’s appeal is significantly stronger abroad and “Genisys” and his future films draw the bulk of their grosses from overseas, it will be OK with Paramount.

“You’d like the domestic numbers to be as strong as possible, but wins and losses are calculated on a global basis,” said Colligan.