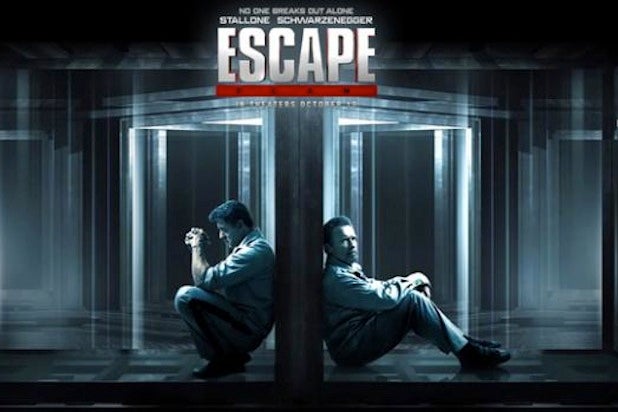 Sylvester Stallone and Arnold Schwarzenegger are an action dream team who join forces to escape an inescapable prison this weekend in “The Escape Plan.” But is it the best they can do?

Although the Hollywood icons are getting older, they’re not showing any signs of slowing down, so we assume they’re not done teaming up to kick ass just yet — providing they can find the right project.

Also read: Movie Titles Can Matter at the Box Office – But How Much?

Here are six custom movie scenarios carefully crafted for more collaboration  in every genre that we know and love.

Let’s start with their favorite:

Logline: New York City’s toughest retired cop (Stallone) accidentally travels through time and finds himself trapped in the South at the height of the slave trade. With Lincoln’s Gettysburg Address decades away, he takes matters into his own hands and clashes with a brutal plantation owner (Schwarzenegger) while fighting for abolition.

Logline: In the future, senior citizens retire to their own designated country to avoid overpopulation in the United States. But when two tough-as-nails World War III veterans (Stallone, Schwarzenegger) discover that country is actually a death camp for citizens deemed “disposable,” they set out to prove their worth to society — by destroying it.

Logline: A retired CIA operative (Stallone) moves his family to a small Ohio town where he volunteers to coach his son’s Little League baseball team, only to discover one big problem: his former KGB rival (Schwarzenegger) has already settled in the same town and coaches his own son’s team, the Reds.

Logline: The T-800 (Schwarzenegger) is back, and this time he’s protecting 2-year-old John Connor from a robotic version of himself — the JC-100 (Stallone), which Skynet manufactured after capturing and killing Connor in the year 2048.

Logline: As one of the world’s foremost authorities on the supernatural underworld that has been horrifying humanity for centuries, Professor Robert Hood (Schwarzenegger) has slain every monster he has ever encountered — except the one responsible for his daughter’s death. 20 years later, the shapeshifting beast (Stallone) has resurfaced, and Prof. Hood is the only man who knows how to stop it.