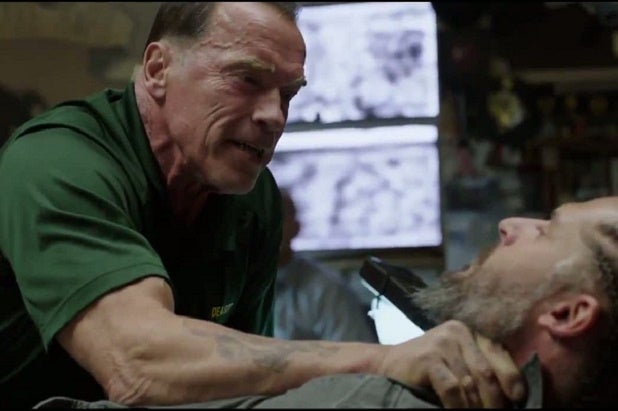 Arnold Schwarzenegger set off his third consecutive box-office bomb with “Sabotage” this weekend, but it’s going to take more than that to stop him from making movies.

It’s a little like his character in “The Terminator,” who just keep’s coming back despite taking some major blows. And for the record, Schwarzenegger will begin shooting a fifth “Terminator” movie in a few weeks.

“Sabotage,” a David Ayer-directed thriller about a drug bust gone bad, took in just $5.2 million this weekend for Open Road Films. That’s the worst wide opening ever for the 66-year-old action star, and his third straight flop since the former California governor returned to the big screen. Last year’s “Escape Plan,” in which he co-starred with Sly Stallone, opened to $9.2 million, and “The Last Stand” was even worse with $6.2 million.

Also read: ‘Sabotage’ Review: Schwarzenegger Came Back to Hollywood for This?

Schwarzenegger’s roughly 30 movies have made more than $4 billion at the worldwide box office since his first movie, “Hercules in New York,” debuted in 1970. But his biggest hits, like the “Terminator” movies, “True Lies” and “Total Recall” came decades ago.

The Governator’s camp wasn’t commenting Sunday, but it’s clear he’s not quitting any time soon. The superstar already has two movies in post-production, and more films in the works.

One is “Maggie,” a post-apocalyptic horror film directed by Henry Hobson that co-stars Abigail Breslin and Joely Richardson. He’s one of the producers on the low-budget Gold Star Films project, which follows a teenage girl in the Midwest who becomes infected by a disease that slowly turns the victims into zombies. It’s set to open later this year, but doesn’t have a release date yet.

The second is “The Expendables 3,” the latest in the series of bad-ass geezer films from Avi Lerner‘s Nu Image/Millenium Films. The first two brought in nearly $580 million at the worldwide box office, with the vast majority of that coming from abroad.

That’s significant, because Schwarzenegger can still be a force at the overseas box office. The best evidence of that would be “Escape Plan” which, despite topping out at $25 million domestically, brought in more than $112 million internationally. It was a major hit in China, while taking in nearly $41 million, and may yet spawn a sequel.

“The Expendables 3,” which is set for an Aug. 15 release via Lionsgate in the U.S., is a veritable who’s who of aging acting stars including Stallone, Jet Li, Mel Gibson and Harrison Ford, among others.

“Arnold has been a box office bust in the U.S. ever since he came back from his political tour of duty, and even before that his star was steadily falling,” Exhibitor Relations vice-president and senior analysts told TheWrap. “The reason he’s still being offered modestly budgeted action films at his age is the fact that overseas audiences are still smitten with the aging action star.

“Obviously it ain’t 1986 over here anymore, but he can still flex his muscles abroad,” said Bock.

Schwarzenegger has several projects in development, including “Terminator: Genesis,” which Paramount has set for July of 2015. Alan Taylor (“Thor: The Dark World”) is directing and James Cameron, who directed and wrote “The Terminator” in 1984, returns to write the script on that one.

Also on his schedule are Universal’s “The Legend of Conan,” Montecito Pictures’ Ivan Reitman-directed “Triplets,” in which he’ll re-team with his “Twins” co-star Danny DeVito, and a remake of “The Toxic Avenger.”