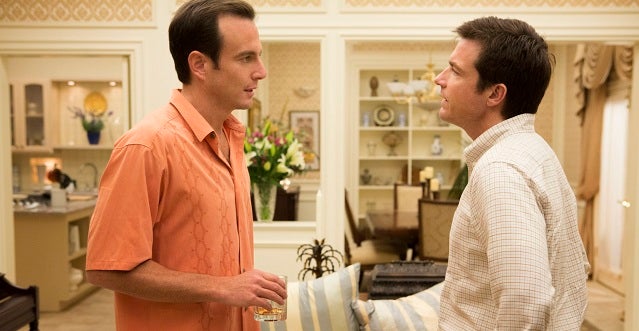 Seven years after its cancelation by the Fox Network, "Arrested Development" made its return Sunday on Netflix. The verdict's are still coming in, but the early notices are mixed.

The premiere episode in the show's Season 4 was called "Flight Of the Phoenix," but all of the 15 new episodes are available for viewing now. Ardent fans welcomed Jason Bateman, Will Arnett, Will Cross, Michael Cera, Portia de Rossi and the rest of the Bluth's back beginning at 3 a.m. E.T. Sunday.

Several critics saw the nature of on-demand online streaming as having an ill effect on approach taken by the groundbreaking comedy's creator Mitch Hurwitz and the show itself.

Most missed was the frenetic pace of the show, at least by the New York Times' Mike Hale, who recalled the show's glory days — they weren't that glorious, since it was canceled — and its unique rapid-fire approach. "That density was, along with the performances, the best thing about the show, and it took away any need to make the story rational or even engaging in any conventional sense," Hale wrote. "It also meant that most of the characters could be one-dimensional cartoons – mean mother, venal father, materialistic sister, dumb brother-in-law – as long as the writers were endlessly inventive in making fun of them and in embroidering their comic universe."

"Story and character now overshadow jokes and conceptual foolery, but for all their new prominence, they’re still as thin and rudimentary as they were in the first three seasons – and watching the episodes in large doses further exposes their deficiencies."

Not everyone felt that way, and several critics noted the extremely high bar the show had set for itself, further heightened by the hype that has preceded its Netflix launch.

"The expectations have been sky high, of course, but could the show live up to it after so long, with its legend only growing? The premiere episode said yes… with some caveats," said Eric Goldman on the web site IGN.

"What’s important to keep in mind of course is just what a high standard 'Arrested Development' has set for itself. We expect a level of brilliance that is hard to achieve and “Flight of the Phoenix” wasn’t a complete home run in this regard. But it still had plenty to love," he wrote.

"We already knew that, thanks to the busy schedule of the cast, these new episodes would not feature ensemble stories, but rather be very character-focused, with one person at the center and others floating in and out. But seeing a story about Michael Bluth (and plenty of George Michael Bluth) made it hard not to smile, and certainly the cast members we saw in this episode quickly proved they have the same great chemistry with each other."

The Wall Street Journal's Nathan Rabin thought the show had lost a step or two in its long stint on the sidelines.

"At its worst, the new/old 'Arrested Development' is reduced to doing an shaky imitation of itself: the characters and themes are there but the beats are slightly off, as is the tone. 'Flight Of The Phoenix' is not without laughs or moments of inspiration, but they are doled out leisurely and with a dispiriting lack of urgency."