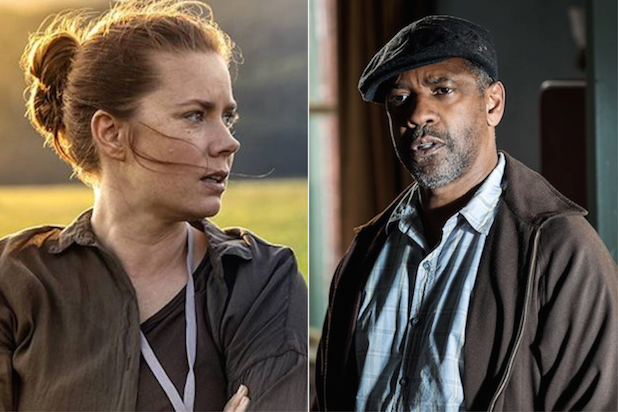 “Hell or High Water,” “Arrival,” “Fences,” “Loving” and “Nocturnal Animals” are among the theatrical films nominated by the Writers Guild of America for its annual awards, the WGA, West and WGA, East jointly announced on Wednesday morning.

The Best Original Screenplay category consists of “Hell or High Water,” “La La Land,” “Loving,” “Manchester by the Sea” and “Moonlight,” while the field in the Best Adapted Screenplay category is “Arrival,” “Deadpool,” “Fences,” “Hidden Figures” and “Nocturnal Animals.”

(“Moonlight” was nominated in the original screenplay category because the Tarrell Alvin McCraney play adapted by Barry Jenkins was never produced; the Writers Branch of the Academy has disagreed and placed the film into the Oscars’ adapted-screenplay category.)

In the documentary category, nominations went to “Author: The JT Leroy Story,” “Command and Control” and “Zero Days.” The last two of those films made the Oscar documentary shortlist.

Unlike the other major Hollywood guilds, the Writers Guild restricts its awards and nominations to screenplays written by members and/or produced by companies that are guild signatories. As a result, a number of Oscar screenwriting contenders are ineligible for Writers Guild Awards each year.

This year, “Florence Foster Jenkins,” “The Lobster,” “Zootopia,” “Toni Erdmann” and “Everybody Wants Some!!” are among the ineligible films in the original-screenplay category, while “Lion” isn’t eligible on the adapted side.

On average, three out of five WGA nominees go on to receive Oscar nominations; only once in the last 10 years (and 20 categories) has a category matched exactly.

Also Read: How Many Votes Will It Take to Get an Oscar Nomination in 2017?

The Writers Guild Awards will take place at simultaneous ceremonies in New York and Los Angeles on Feb. 19.

The Directors Guild of America and the Producers Guild of America, the final two of the four major Hollywood guilds whose nominations are examined closely for clues to Oscar voting, will announce their nominees next week.

“Moonlight,” Written by Barry Jenkins, Story by Tarell McCraney; A24

ADAPTED SCREENPLAY
“Arrival,” Screenplay by Eric Heisserer; Based on the Story “Story of Your Life” by Ted Chiang; Paramount Pictures

“Fences,” Screenplay by August Wilson; Based on his Play; Paramount Pictures

“Nocturnal Animals,” Screenplay by Tom Ford; Based on the Novel Tony and Susan by Austin Wright; Focus Features

Also Read: How Tom Ford Went From Designer to Director With 'Nocturnal Animals'