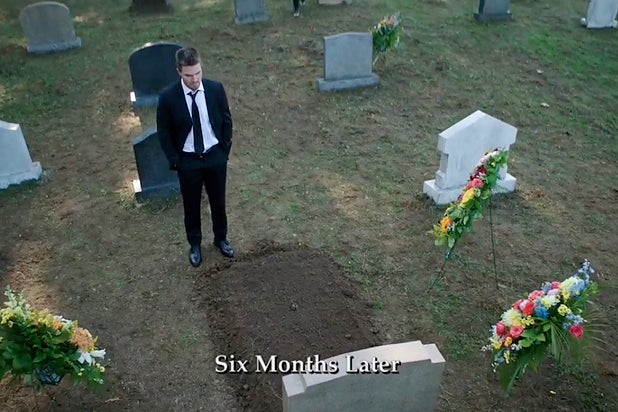 (Spoiler alert: Please do not read on if you have not watched Wednesday’s episode of “Arrow,” titled “Eleven Fifty-Nine.”)

The big mystery of who died on “Arrow” has been answered, and the unfortunate member of Team Arrow who bit the dust is … Laurel Lance, a.k.a. the Black Canary.

“From a creative standpoint, I think that the writers and I have always said that, since Season 2 up until now, Laurel has had a truly amazing journey,” Katie Cassidy, who plays the character, told reporters following a screening of the episode. “It made sense to me, creatively. We’ve told Laurel’s story, it’s come to an end in the Arrowverse.

“I love everyone on set, our crew, being there for four years, they’ve become family, it’s hard to not go into work every day with such amazing people. That part is certainly sad. But again, I was okay with it, and we all came to an understanding of this was what’s going to happen. It’s such a jolt and it gives [the producers and writers] so much more to do and places to go with it. Otherwise, I feel like shows can get stale.”

Here are a few other revelations from Cassidy and executive producers Marc Guggenheim and Wendy Mericle.

Why Laurel?
“We started off this year with the promise of a death,” said Guggenheim. “When we sort of worked our way through our various different creative choices, we realized that the thing that will give us the most ‘pop’ going into the end of the season and next season, unfortunately, would be Laurel.”

The decision had nothing to do with “shipping.”
Despite some fans’ contention that Laurel’s death has to do with the show’s main romantic pairing of Oliver (Stephen Amell) and Felicity (Emily Bett Rickards) and Laurel’s former attachment to the Green Arrow, that’s not true at all, according to Guggenheim.

“We knew that it would enrage a  lot of people. We’re not immune to the ‘shipping‘ and Internet controversy. … We’re not blind to it, but we’ve never made decisions creatively on the show because of the Internet,” he said. “Truth be told, we told the Laurel-Oliver romance story in Season 1. We told that story, we never really thought about going back to it.”

Dead doesn’t mean goodbye forever.
Guggenheim acknowledged that the meaning of death has changed, in a world that now includes (mostly via sister shows “The Flash” and “Legends of Tomorrow”) time travel and parallel universes where endless doppelgangers of our heroes reside. Indeed, Cassidy has already lined up Laurel’s next few appearances in the Arrowverse.

She will play herself in the next episode of “Arrow,” which will feature heavy Laurel Lance flashbacks. Then she will appear as the Earth 2 version of Laurel, going by the code name Black Siren, on an upcoming episode of “The Flash.”

Finally, she will reprise the role on Season 2 of CW Seed’s animated “Vixen,” about the titular DC superhero who made a visit to “Arrow” earlier this season.

But in this iteration, she’s really dead.
Before she suddenly seizures and dies, Laurel and Oliver have a private moment where they recount their history together, and she asks for a favor. Of course, the audience is not privy to what she asks him. But if you’re thinking the favor was for him to help her fake her own death, don’t get your hopes up.

“No,” Guggenheim said definitively. “We’ve done that, we’ve done a fake death before. That’s the thing, we’re always trying to figure out how to do these things. … That fake-out where you thought she was okay but she wasn’t was our attempt [to address], How do we do a death we haven’t done before?”

As for what, exactly, Laurel asked of Oliver, that answer isn’t coming any time soon.

But in the immediate future, the aftermath of Laurel’s death will play out not only on “Arrow” but also on “Legends of Tomorrow,” where her sister Sara (Caity Lotz) will find out what happened.

Cassidy went out in full Black Canary mode.
While Laurel’s death takes place in a hospital surrounded by Team Arrow, Cassidy was back in her iconic Black Canary costume for her last moments on set.

“We had to do a reshoot actually. When Darhk stabs the Black Canary, that was a week after,” she recalled. “That was the very last scene we shot. And it was so weird because we had broken for lunch, we came back, I was running to set, putting on my jacket and gloves, and they were just calling me back to set to show-wrap me. And I didn’t know I was done, so it was a bit of a shock. But it was good, there was no other way I would have wanted to go.”

Paparazzi who leaked the death: “Not cool.”
Despite being set up as the season’s big mystery, the identity of the person in the grave was unfortunately leaked to some outlets online before the episode could air by paparazzi who found the set of Laurel’s funeral as it was being filmed. The producers were not happy.

“It’s not cool, straight up,” Guggenheim said. “I just look at these paparazzi people like they’re just spoiling it for everybody. They’re kind of taking a big steaming dump on the work that all these people do. They work in Vancouver, unbelievable hours, in the , terrible conditions, and they do it all to produce shows that everyone can be entertained by. And part of being entertained is being surprised. … It does happen, and it just sucks. I’ll just say it: Shame on those people.”