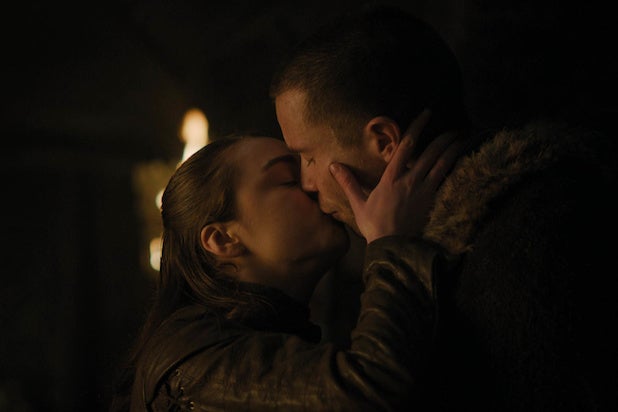 (Warning: This post contains spoilers for Sunday’s “Game of Thrones,” titled “A Knight of the Seven Kingdoms”)

Arya and Gendry sitting in a tree, doing way more than k-i-s-s-i-n-g.

On Sunday’s “Game of Thrones,” the second episode of the HBO fantasy series’ eighth and final season, Arya Stark (Maisie Williams) lost her virginity to her dear friend Gendry (Joe Dempsie) on the eve of the battle between the troops at Winterfell and the Night King and his Army of the Dead.

And if you had a hard time believing Arya and Gendry were actually going to do the deed as the scene began, then you were in good company, because Williams herself didn’t trust the script when she first read the scene.

“At first, I thought it was a prank,” Williams told Entertainment Weekly in an interview posted Sunday, noting showrunners David Benioff and Dan Weiss have been known to tease the “GoT” cast before with fake scripts. “I was like, ‘Yo, good one.’ And [the showrunners were] like, ‘No, we haven’t done that this year.’ Oh f–k!”

Also Read: 'Game of Thrones' Season 8, Episode 3 Preview: The Dead Have Arrived and the Living Won't Back Down (Video)

But Williams told EW she had come to terms with the truth by the time they got to the table read: “I got to the read-through and I’m reading the scene and thought, ‘Oh, we’re actually going to do this. When do I shoot this? I need to go to the gym.’ A whole list of things.”

As for what the scene itself meant for her character, the actress — who is now 22, but started on the series when she was just 11 — says, “it was really interesting because it’s a very human relationship for Arya.”

“This is something she’s stayed away from, an emotion we’ve never really seen her engage with,” Williams told EW. “David and Dan were like, ‘It’s the end of the world, what else would you have her do?’ This may be is a moment where Arya accepts death tomorrow, which she never does — ‘Not Today.’ So it was that moment where she says, ‘We’re probably going to die tomorrow, I want to know what this feels like before that happens.’ It’s interesting to see Arya be a bit more human, speak more normally about things people are scared of.”